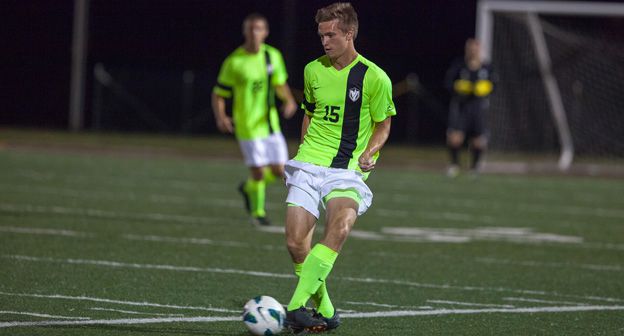 Goals scored from set pieces in the first and last five minutes of the first half would prove to be the difference in the Valparaiso men’s soccer game at Dayton, as the Crusaders dropped a 2-0 decision on the road against the #19 Flyers.

“I'm disappointed for the guys because I felt that we played well enough to deserve more out of the game tonight, but we have to give Dayton credit,” said head coach Mike Avery. “They are a good team and are playing with the confidence of having such a tremendous start to the year; they took advantage of two set piece opportunities that forced us to chase the game.”

A slow start from the Crusaders resulted in a Flyer goal in just the 5th minute of the match.  Dayton’s Abe Keller was able to convert from the penalty spot to put the Flyers on top early.  The Crusaders were able to raise their level of play as the first half progressed.  A shot from Yannick Iwunze (Paris, France/Hightower [Tex.] H.S.) forced the Dayton goalkeeper to produce an important save in the 14th minute of the match.  Minutes later, the Crusaders would create another opportunity off of a corner kick served in by Jordan Aidoud (Lyon, France/CEFAM).  Valpo was unable to convert the chance.

Valpo started the second half with a much higher level of energy and focus.  As a result, the Crusaders were able to control more of the game and put the Flyers under pressure.  Chances came immediately in the second half as Charles Barden (Cedar Rapids, Iowa/Linn-Mar) and Aidoud were each able to take shots for the Crusaders.  Later in the 71st minute, Nick Suker (Downers Grove, Ill./South) was able to fire a good shot on goal but the Dayton goalkeeper was again able to make the save.  For the most part, the Crusaders had the better of play in the second half; out-shooting the Flyers 10-7.  The Flyers, however, would withstand the Crusader pressure and go onto win the game 2-0 to remain undefeated at 9-0-0.

“When we figure out how to start the game with the same energy we have been finishing games, we are going to go on a real run this season,” said Avery. “I believe it's going to happen. It's a process and we are learning through some tough games, but we are certainly growing. I'm excited for next weekend at Green Bay to see if that's the day it all comes together.”

Valparaiso (3-3-3) looks to put it all together this Saturday, October 5 as the Crusaders travel to Green Bay to take on the Phoenix in an important Horizon League matchup.  Kickoff is scheduled for 3 p.m. CDT.  The match on Saturday will have free live video available through the Horizon League Network, while live stats will be available through ValpoAthletics.com.