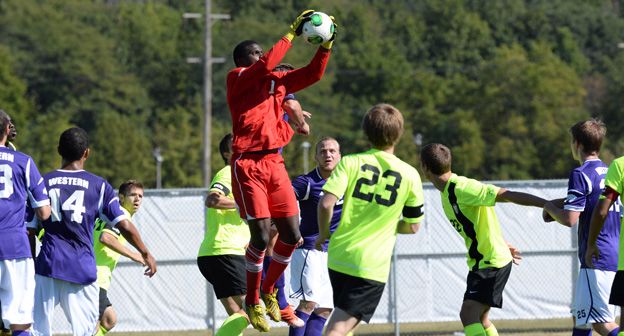 For the second time in as many games, the Crusader men played to a 0-0 double overtime draw. This time around, the Crusaders met Loyola Chicago for a Tuesday night match-up between former Horizon League foes. The game would stay level at 0-0 after 90 minutes, forcing the two teams to play two ten minute periods of extra time to decide a winner. Neither the Crusaders nor Ramblers were able to break the tie however, meaning the match would end in a 0-0 draw.

The first half of play was fairly even between the two sides in terms of possession. The difference in the first half was the Crusaders' ability to create quality chances through their possession. In keeping the ball, the Crusader men were able to connect passes through the Rambler defense and create dangerous chances on goal. The best chance of the first half came in the 30th minute. A solid spell of possession from the Crusaders led to Eric Nieto (Fort Lauderdale, Fla./Louisville Collegiate [Ky.]) exploiting the Rambler back line with a penetrating pass to find Jesse Ortiz (Aurora, Ill./West Aurora), whose run carried him into the Rambler penalty area. Ortiz was able to collect Nieto’s pass and fire a shot meant for goal. The shot from Ortiz would drift high and wide, however, keeping the match deadlocked at 0-0.

Early in the second half, the Crusaders increased the tempo of play and really put their stamp on the game. The team dominated possession and rarely allowed the Ramblers to connect passes outside of their defensive third. Loyola was forced to play long balls to get in and behind the Crusader back line, but freshman goalkeeper Nico Campbell (Kingston, Jamaica/St. George’s College) was aware enough to read each long pass and win the ball before it ever resulted in serious danger. Again, possession would lead to quality chances for Valpo. The best chance from either team in the second half came in the 79th minute. Jordan Aidoud (Lyon, France/CEFAM) and Yannick Iwunze (Paris, France/Hightower [Tex.] H.S.) were able to play a clever combination to create space behind Loyola's left back. Iwunze was then able to attack the end-line and serve a dangerous ball in the air to the far post. Kevin Klett (Muncie, Ind./Burris) timed his run well to out jump the Rambler center back and connect on a powerful header that looked certain to give the Crusaders the lead late in the match. Klett’s chance would be denied, however, as Rambler goalkeeper Tim Dobrowolski was able to make a diving save to push the ball over the crossbar and keep the match tied.

Both sides entered the overtime periods with heavy legs and fatigue. The Crusaders were able to outshoot the Ramblers 3-1 in the two periods of overtime, but none of the Crusaders’ three chances created much trouble for Dobrowolski. With neither side able to find goal, the game ended in a 0-0 draw.

Valparaiso (3-3-5, 0-1-2 Horizon) returns to action this Saturday night at Brown Field. The Crusaders will host Milwaukee in a crucial Horizon League contest. Kickoff is set for 7:00 p.m. CT. The match can be viewed live on the Horizon League Network and live stats will be available through ValpoAthletics.com.