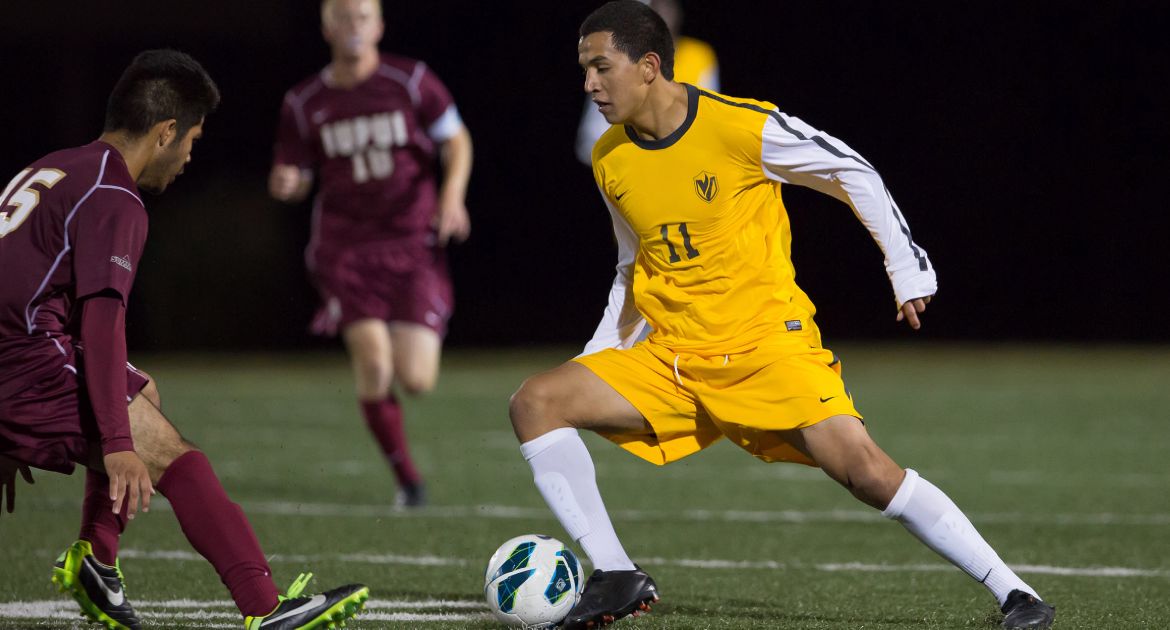 Crusaders are back on the Road to Take on Kentucky

This Week in Crusader Soccer: After falling 1-0 to Milwaukee in a tough league game, the Crusader men travel to Lexington, Ky. to take on Kentucky in a nonleague, midweek matchup. The Crusaders then have the weekend off, as their next match isn't until October 25th.

Previously: The Crusaders return to action this week after falling to #24 Milwaukee on Saturday night. Valpo dominated the match early on but the Panthers were able to score a fantastic goal against the run of play. The Crusader men continued to play well and take the game to the Panthers after conceding the goal, but were unable to produce an equalizer. With the 1-0 loss, the Crusaders fell to 3-4-5 overall and 0-2-2 in league play.

Following The Crusaders: Wednesday's match at Kentucky will have live stats available through ValpoAthletics.com. Over the course of the 2013 season, seven matches will have free live video on the Horizon League Network, including three matches at home. Visit @VUMSO on Twitter to view comments and photos leading up to Wednesday night’s match.

Series Notes: Kentucky - Wednesday night's match against Kentucky will be only the second meeting between the Crusaders and Wildcats. The two sides last met during the 1995 season with Kentucky claiming the victory.

Scouting the Opposition: Kentucky - The Wildcats currently sit at 3-6-1 on the season, with wins coming against Georgia State, IPFW, and Old Dominion. In their last outing, the Wildcats played to a 0-0 draw against South Carolina. The Wildcats have scored 11 goals and have conceded 13 in 10 games played. Brad Doliner leads the team with nine total points with four goals and one assist. Isak Krogstad is not far behind at eight total points with three goals and two assists. Callum Irving and Jack Van Arsdale have split time in goal for the Wildcats. Irving is 3-3-1 when starting and has conceded eight goals. Arsdale has conceded five goals and is winless in his three starts.

Freshman Milestones: Freshman goalkeeper Nico Campbell earned his first career shutout in a 0-0 draw at Loyola Chicago. Campbell made four saves for the Crusaders. After making a solid season debut as a substitute against Green Bay, freshman Kevin Klett earned his first career start at Loyola Chicago. Klett put in another solid performance, playing 70 minutes and forcing the Rambler goalkeeper to produce a goal saving stop.

A Tale of Two Halves: At times during this season, games have been a tale of two halves. In the first half of games, the Crusaders have been slow to start and are unable to find the game. As a result, the team has conceded early goals. In the second half of games however, the Crusaders look to be a completely different team. They control the run of play, keep the ball for extended periods of time, and create plenty of quality chances. In the second half of games, the Crusaders more than doubled their amount of goals scored (7 to 3), increased their amount of shots (73-44) and corners taken (30 to 22). The team also cuts down the number of chances their opponents take from 26 down to 22.

Finishing Chances: Valpo now sits with just 11 goals scored in 12 matches. The Crusaders are creating plenty of chances but are missing the final touch needed to find goal. What's promising is that six players have accounted for the 11 goals scored. Adrian Graham, Julio Velasquez, and Jordan Aidoud each have one goal this season, while Todd Vervynckt has netted two goals to his name. Leading the team this season are Charles Barden and Nick Suker with three goals apiece.

Ranked Opponents: The Crusaders have currently played four teams that have been ranked in the Top 25 in the national rankings. Three of those games have come on the road.  The Crusaders played #24 Michigan State, #12 Tulsa, #19 Dayton, and #24 Milwaukee. Valpo is 1-3-0 against Top 25 opponents – then win coming in a 2-1 victory over Michigan State.

Home Sweet Home: The Crusaders will have played 11 of 13 games on the road before returning home on October 25th to play a match at Brown Field. The Crusaders' match against UIC will be the team's third home game of the season. Valpo will have two more games at home following their match vs. UIC. The Crusader men host Western Michigan on October 30th and Detroit on November 9th.

Looking Ahead: The Crusaders will have nine days between their game Wednesday night at Kentucky and their next game vs. UIC. After Kentucky, the Crusader men will have their first two-game home-stand of the season with UIC coming to brown field on October 25th and Western Michigan four days later on October 30th.

Champions in the Classroom:  In 2012, Todd Vervynckt was selected to the Horizon All-Academic team, the CoSIDA Academic All-American Third team, and the All-District V first team.  Vervynckt is in the Mechanical Engineering program at Valparaiso.