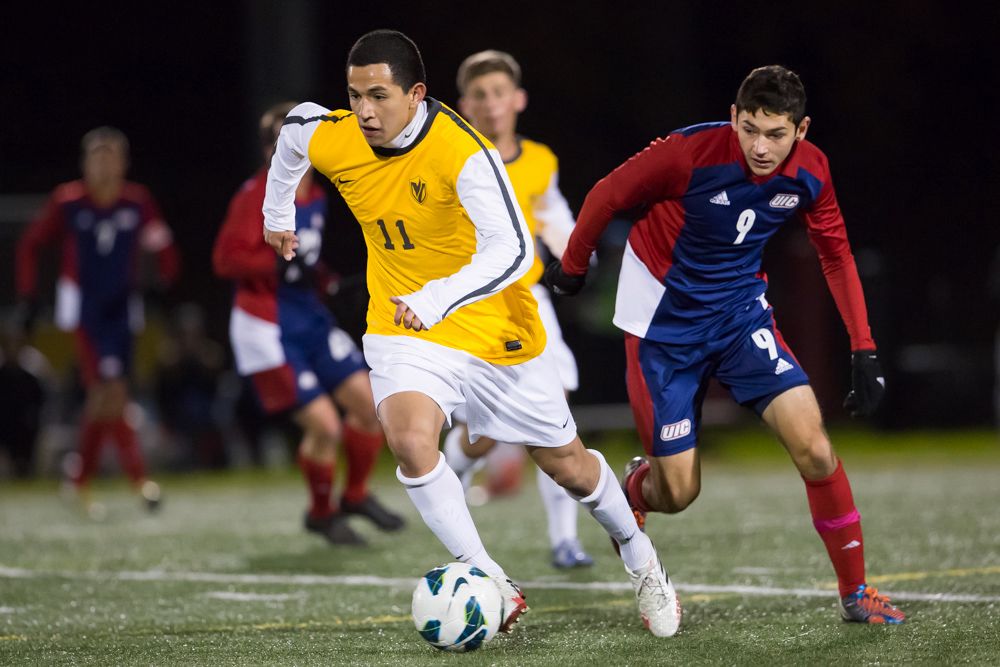 A goal in the 42nd minute from Kevin Klett (Muncie, Ind./Burris) wasn’t enough in the Crusaders’ Horizon League match against UIC, as the Flames were able to put two away in the second half to beat the Crusaders 2-1 and stay unbeaten in league play.

“Obviously this one stings quite a bit, and there is a lot of frustration in our locker room, from the staff on down through the players, but the truth is that UIC got the result that they deserved,” said head coach Mike Avery. “Even though we held the lead, and even though we talked at half time about not sitting in but pushing to find the second goal, we played as if we were just hoping to hang on. It takes a little more courage than what we showed in the second half to win these tight league games.  UIC is at the top of the league for a reason - they are a good team that believes they will win. I think we are also a good team, but right now we are hoping to win more than believing we will.”

The first half of play was fairly even as each team was able to enjoy periods of quality possession. A shot from Omar Lawrence (Kingston, Jamaica/Excelsior) in the 23rd minute gave the Flames an early scare. Lawrence’s strike from nearly 30 yards out forced the UIC goalkeeper to make an important stop. The Crusaders were able to pull ahead in the 42nd minute, however, as Klett was able to chase down a long ball sent in by Adrian Graham (Kingston, Jamaica/St. George’s College) and beat the UIC goalkeeper to put the Crusaders up 1-0. Klett’s goal was the first of his young career.

The second half began much like the first, as each team looked to gain control of the game. A good piece of combination play between Jordan Aidoud (Lyon, France/CEFAM) and Yannick Iwunze (Paris, France/Hightower [Tex.] H.S.) led to a quality service by Iwunze but the UIC goalkeeper was able to put an end to the attack. In the 70th minute, UIC’s Kyle Lindberg was able to level the game at 1-1 with a good piece of individual play that allowed him enough space to take a shot that found goal.  Exactly ten minutes later in the 80th minute, UIC’s Aris Zafeiratos was able to produce the game winner.

With ten minutes to play, the Crusaders searched for an equalizer and nearly found it on two separate occasions. A long throw sent in by Jacob Unger (Apex, N.C./Middle Creek) was cleared off the line by the UIC defense in the 86th minute.  A great touch from Jesse Ortiz (Aurora, Ill./West Aurora) in the 89th minute looked sure to level the game at 2-2, but his shot would hit the crossbar and the match would end with UIC on top 2-1.

“The bottom line now is that we have two games in the league left to play, and we are going to need win them both if we want a chance to participate in the post season,” said Avery. “If the guys can stick together and work through this, we could be a very dangerous group to contend with over the next few weeks.”

The Crusaders (3-6-5, 0-3-2 Horizon) are back at home on Wednesday, October 30th for a nonleague match against Western Michigan (6-7-0). Kickoff is scheduled for 7:30 p.m. Live stats for the game will be available at ValpoAthletics.com.