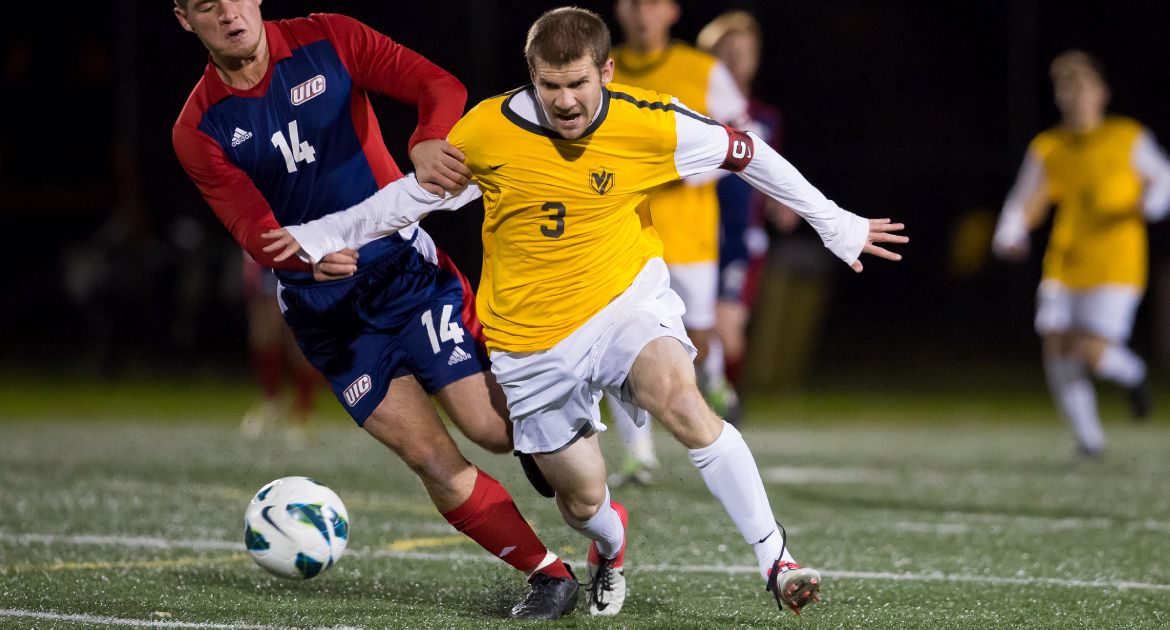 With less than four minutes remaining in the Crusaders’ match at Cleveland State, Charles Barden (Cedar Rapids, Iowa/Linn-Mar) was able to convert from the spot to put the Crusaders a goal up on the Vikings. The Crusaders held onto the lead as time expired to earn their first Horizon League victory of the season and keep hope alive for a berth in the Horizon League championship.

In a match that seemed certain to go into extra time, Barden, the Crusader skipper, was brought down in the area by a Viking defender in the 87th minute of the match. With the game level at 0-0, Barden coolly stepped to the spot and converted his penalty to put the Crusaders up a goal to none. With little time remaining in the match, the Crusader men were able to stay organized defensively and keep the Vikings off the scoreboard. Barden’s goal, his fourth of the season, couldn’t have come at a better time, as the Crusaders needed the result to stay in the hunt for a birth in the Horizon League Championship.

“I'm very proud of the guys tonight because they put in a very professional performance against a good team on the road - and under some very cut and dry circumstances,” said head coach Mike Avery. “We needed a win to stay alive in the playoff chase. Knowing that, the natural tendency would be to really push and open up the game, but against a team as good in possession as Cleveland State, that would have been a recipe for disaster. We planned instead to stay compact, to pick and choose our attacking moments, and to stay committed to using all ninety minutes to try to find the goal.”

The first half of play featured plenty of possession from Cleveland State. The Crusaders, however, were able withstand the Viking attack and build to create chances of their own. This Valpo counter attack was highlighted with shots on goal from Jesse Ortiz (Aurora, Ill./West Aurora) and Jordan Aidoud (Lyon, France/CEFAM). Viking goalkeeper Austin Saini was forced to make important saves on both attempts.

The second half was much of the same; the Crusaders would commit to staying organized defensively and pick their moments to go forward and search for the opening goal of the match. Finally, that moment came as Barden was fouled in the penalty area after receiving the ball in a dangerous spot. The Crusader defense played brilliantly to keep Cleveland State off the scoreboard and limit the Vikings to just two shots on goal. The shutout was the third of the season for Tom Serratore (Tinley Park,Ill./Andrew) and the fourth total for the Crusaders.

“The execution of our plan was tremendous, and we earned a great result,” said Avery. “We've got some work still to do, but it is exciting to go into the final weekend, on senior day and at home, with so much riding on the line.”

The Crusaders return to action on Monday for a nonleague game with #24 Michigan. Live stats for the game will be available through ValpoAthletics.com. Valpo then enters its regular season finale with Detroit (3-10-4, 0-6-0 Horizon) needing a result, along with a Green Bay loss at UIC, to advance to the Horizon League Championship.