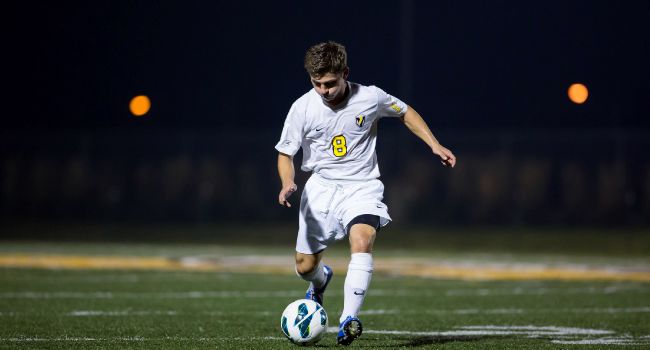 The Crusader men fell in a tough match at #20 Michigan on Monday night. An early penalty given to the Wolverines would turn out to be the difference in a 1-0 loss for the Crusaders.

The Crusaders were whistled for a handball in their own penalty area in the 27th minute of the match. Michigan’s Fabio Pereira was able to convert the penalty in spite of a great effort from Crusader goalkeeper Tom Serratore (Tinley Park, Ill./Andrew). Pereira’s spot kick put the Wolverines up early and forced the Crusaders to chase the game.

“It was a tight game where both teams had spells of being on the front foot, and spells of being back on their heels,” said head coach Mike Avery. “The difference in the game was a penalty kick, and while I can't argue with the call, it was a bit of bad luck in that one of our players was uncontested and misjudged a clearance that made contact with his hand.  Other than that penalty kick moment, we did a good job of keeping them out of the box and limiting their shots to shots from distance, where Tom was able to make some fairly routine saves.”

Valpo looked to respond just minutes later as Zev Taublieb (Malibu, Calif./Agoura )was able to create enough space to have a look at goal in the 31st minute, but the junior midfielder’s shot would be saved by Michigan goalkeeper Adam Grinwis, and the Wolverines would keep their 1-0 advantage. Michigan would take a few more looks on goal before the end of the half, but each chance would be snuffed out by Serratore.

Minutes into the second half, Charles Barden (Cedar Rapids, Iowa, Linn-Mar) almost leveled the score at 1-1 with a great strike on goal. Grinwis was able to produce an important save, however, denying the Crusaders once again.

“On the attacking end, we had plenty of balls in their box, but we struggled to get on the end of anything,’ said Avery. “Their backs and goalkeeper did well to keep us from clean looks, and their goalkeeper had one very good save on a chance from Charles Barden, but for the most part we were lacking some urgency to beat a man to the ball.  We will need to be much more proactive on Saturday against Detroit in that area of the game.”

The Crusaders would continue to push for the equalizer, but were unable to produce that special moment needed to find goal. Pereira’s penalty would hold, and the match would end 1-0. Jesse Ortiz (Aurora, Ill./West Aurora) led the Crusaders with two shots on the night, one being on goal. Taublieb and Barden also produced a chance on goal. Outside of the early penalty, Serratore was only called upon to produce three saves.

“Michigan is a good team, ranked nationally, and we went toe to toe with them at their home stadium,” said Avery. “It shows that when we have everyone healthy, which we do now after a long stretch where that wasn't the case, we can play with anyone.  It will be an exciting game Saturday, and we need to be at our best to give ourselves a chance to earn a postseason appearance.”

The Crusader men have the week to prepare for their regular season finale with Horizon League foe Detroit (3-10-4, 0-6-0 Horizon). The match carries plenty of significance, as the Crusaders must take all three points from the game in order to secure a berth in the Horizon League championship. Green Bay must also lose their match at UIC for Valpo to advance. Additionally, Saturday’s match will serve as senior night for seven Crusaders. Kickoff is scheduled for 7 p.m. at Brown Field.