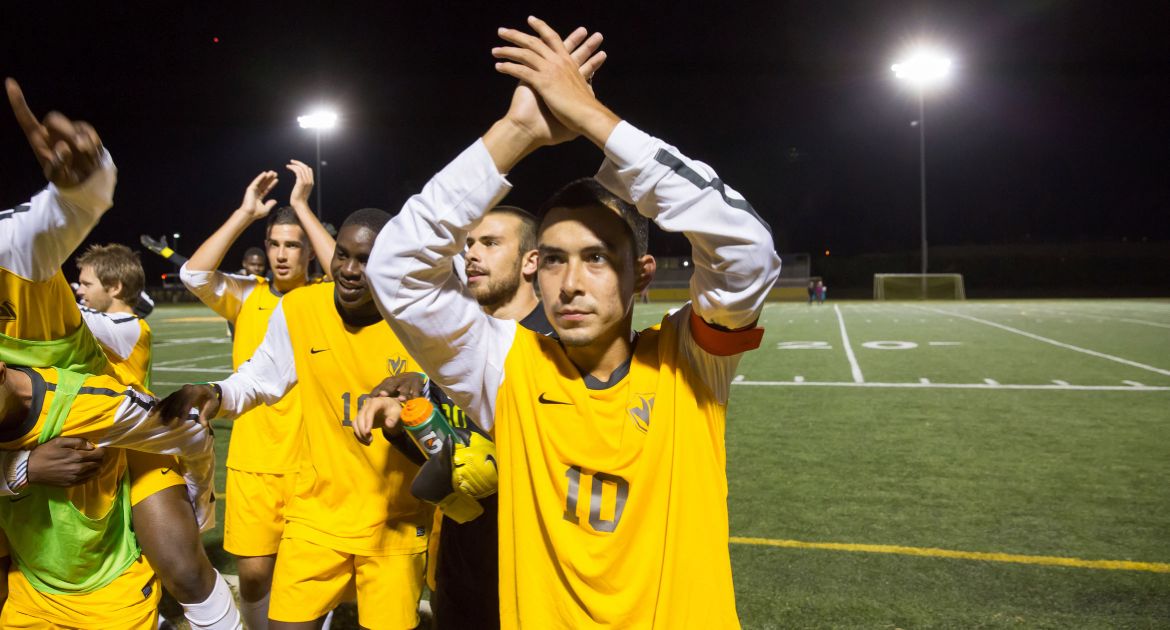 Needing to claim all three points in their final Horizon League match of the season, on senior night, the Crusader men defeated Detroit 1-0 to secure a berth in the Horizon League Championship. Fittingly, it was senior Jesse Ortiz (Aurora, Ill./West Aurora) who found goal to give the Crusaders the victory.

“We are very excited to have earned our way into the Horizon League tournament,” said head coach Mike Avery. “In a league as competitive as ours, nothing can ever be taken for granted, and to qualify has always been the first goal of our season.  We have other goals too, but they are all based on us having this opportunity.”

With less than a minute remaining in the first half, Ortiz collected a ball sent in from Jack McIver (Cincinnati, Ohio/Cincinnati Hills Christian), beat a Detroit defender at the top right corner of the penalty box, and hit the ball into the top left corner of the goal. Ortiz’s goal, his first of the season, couldn’t have come at a better time, as it put the Crusaders up a goal to none in their most important match of the season.

Prior to Ortiz’s goal, the Crusaders were able to dominate possession and create multiple quality chances on goal. The second most dangerous chance of the first half came in the 27th minute of play. A good spell of possession from the Crusaders led to a beautiful piece of combination play between seniors Charles Barden (Cedar Rapids, Iowa/Linn-Mar) and Todd Vervynckt (Plymouth, Ind./Plymouth). Barden found Vervynckt streaking into the area - Vervynckt collected the pass and hit a shot on goal, but the Titan goalkeeper was able to make the save and keep the game level at 0-0.

Entering the second half with a 1-0 lead, the Crusaders continued to create quality chances on goal. Minutes into the second half, Vervynckt found himself with another opportunity to double Valpo’s lead and put the game out of reach. Jordan Aidoud (Lyon, France/CEFAM) was able to spin his defender and play a ball into the run of Vervynckt. Vervynckt took a touch a smashed the ball off the near post of the goal.

“Detroit is a very difficult team to play against, and their strength in set pieces is something that is always difficult to handle, but I was happy with the way we were able to contend with that part of the game,” said Avery. “We had plenty of chances to score a second goal and take some of the drama out of the game, but our final touch was either well saved by their goalkeeper or just a few inches off the mark.”

The Crusaders took nine total shots in the second half, but were unable to extend their lead.  As it turned out, they wouldn’t need to, as Ortiz’s goal in the first half would stand as the game-winner. Detroit took 12 shots in the match, but Tom Serratore (Tinley Park, Ill./Andrew) and the Crusader backs were able to keep the Titans off the scoreboard to preserve the shutout. Serratore made three saves in the match to earn his fourth shutout of the season.

“All in all, though, we've faced two elimination games already and we have been able to stand up to that extra pressure,” said Avery. “Hopefully this bodes well for us as we now head into the postseason.”

With the field now set, Horizon League Championship play begins on Tuesday, November 12. The No. 6 seed Crusaders travel to Rochester, Mich. to take on the No. 3 seed Oakland Grizzlies. The two sides played to a 1-1 draw earlier in the season at Oakland. Kickoff for the match is scheduled for 6 p.m. CT. Live Stats will be available through ValpoAthletics.com.