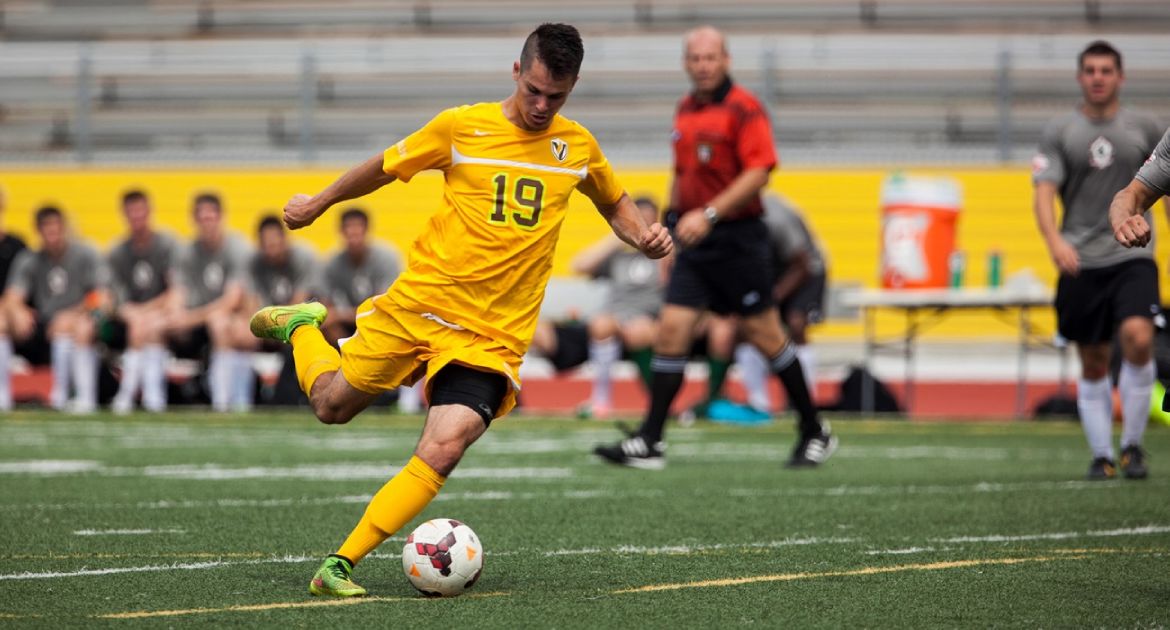 This Week in Crusader Soccer: The Crusaders continue their opening season road trip with a pair of matches this week against tough non-league competition. First up is a short trek to Indianapolis to take on former Horizon League rival Butler on Tuesday evening before traveling north to take on seventh ranked Michigan State Thursday afternoon.

Previously: Valpo opened up its 2014 season with a trip to North Carolina, taking on North Carolina State and Davidson over Labor Day weekend. The Crusaders played strong defense in both games to come out with two scoreless double overtime draws against both opponents. Valpo did not play last week.

Following the Crusaders: Both matches will have live stats available through ValpoAthletics.com. Over the course of the 2014 season, four matches will have free live video on the Horizon League Network, and WVUR, Valpo’s student radio station, will also be broadcasting select matches.

Head Coach Mike Avery: Mike Avery is in his eighth season at Valpo, with 49 wins to his credit. The 2011 Horizon Coach of the Year led the Brown and Gold to their first-ever conference title in the same season and has posted seven of the top-10 defensive seasons in program history over his first seven seasons. The third coach in Valpo’s history, he owns the best winning percentage and second-most wins in program history. He has coached four Goalkeeper of the Year honorees during that stretch, and has also seen one goalkeeper (Kyle Zobeck) and one defender (Stefan Antonijevic) selected in the MLS Supplemental Draft and go on to play professional soccer.

Series Notes: Butler - This will be the 16th time the Bulldogs and Crusaders have matched up, the last time as Horizon League foes battling to a 1-1 double overtime draw in 2011.

Michigan State - This also marks the 16th time the Crusaders will battle the Spartans, with Valpo upsetting the #24 Spartans on their home soil last year, 2-1. Senior midfielder Nick Suker scored the game winning goal in the 78th minute last year.

Scouting the Opposition:  Butler – The Bulldogs are 2-0-2 on the young season, battling SIU Edwardsville to a 1-1 double overtime draw. Junior forward Jeff Adkins and sophomore David Goldsmith lead the team with two goals apiece. Freshman goalkeeper Eric Dick has started all four games and played all 400 minutes of action. He comes in with a stellar 0.68 GAA, and two shut outs against Canisius and IUPUI.

Campbell Honored: Sophomore goalkeeper Nico Campbell won the Horizon League’s Defensive Player of the Week for the week of September 1. He made a combined ten saves while playing all 220 minutes against North Carolina State and Davidson en route to shutouts in both matches.

Road Warriors: The Crusaders are in the middle of a five game road trip to start the season, all against top flight competition. Valpo concludes their road trip with Big Ten opponent Northwestern on September 17 before playing their first home match two days later against Western Illinois. The Brown and Gold also opened last season with a four game road trip, going 1-0-3 and upsetting the #24 Spartans.

Flying Many Flags: This year’s Valparaiso men’s soccer team represents many different countries.  Beyond the borders of the United States, the Crusaders boast players hailing from six other nations for a total of 12 international players born outside the United States.  Leading the way is the contingent from Jamaica, as Valpo counts six Jamaicans on its roster for the 2014 campaign.

#oneVALPO: Throughout this season, the Crusader men’s soccer program will be promoting its #oneVALPO campaign, a campaign to celebrate diversity, via social and digital media and at its games. The first three videos are available at http://youtu.be/Mpv9DL1mLlg, http://youtu.be/9E5NO1YchEg, and https://www.youtube.com/watch?v=iG5coYUdKQw&list=PLTxRmOti-0BMlxucHOzE4siq5uNWRDa8D.