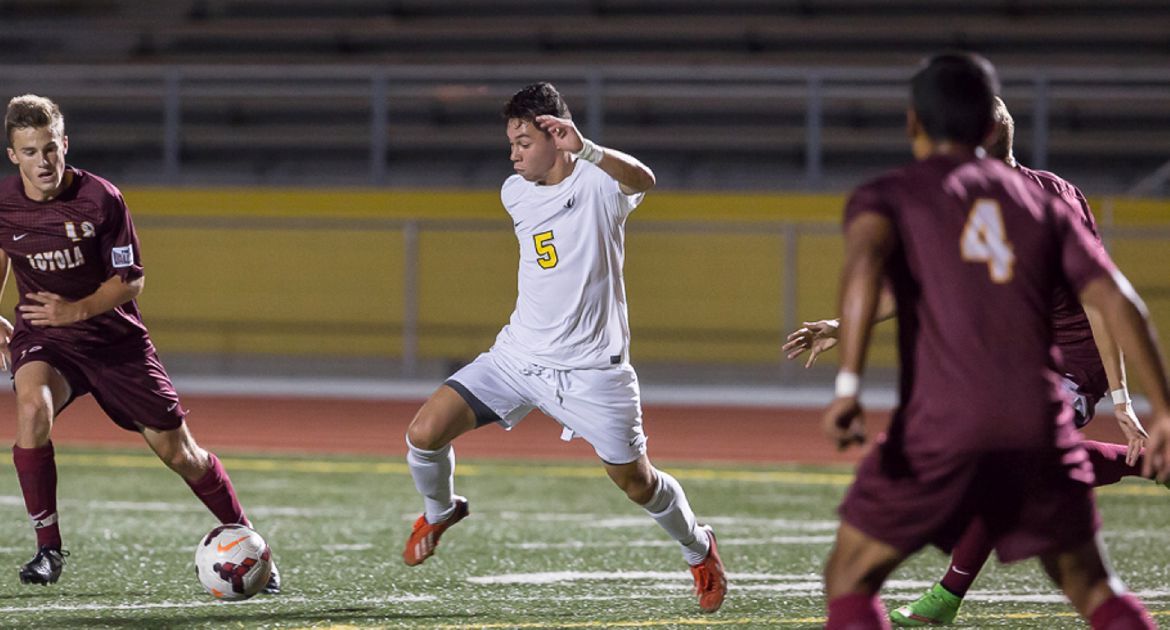 Jacob Gandarilla fights through a pack of defenders to control the ball
Valparaiso at Belmont | September 26, 2014

The Valparaiso men’s soccer team opened Horizon League play Friday night by welcoming Belmont to the league, upstaging the Bruins' league opener in Nashville with a 2-1 victory. Valpo moves to 5-1-2 (1-0 Horizon League) on the season.

The Brown and Gold got their offense going early, almost deja vu from Valpo’s win on Tuesday, as senior midfielder Zev Taublieb (Malibu, Calif./Agoura) pounced on a rebound in front of the goal in the 14th minute to score his second goal of the season and as in many games.

Just under 17 minutes later, junior midfielder Jacob Gandarilla (Albuquerque, N.M./Shattuck-St. Mary's) blasted one from the left side of the box to put the Crusaders up 2-0. He had a chance just six minutes earlier as his header was stopped by Bruins goalkeeper Wes Luvisi. It was his first goal of the season.

“It was a difficult game for us tonight, and we are very pleased to come away with all three points,” Crusader head coach Mike Avery said. “Belmont came out in the second half and made the game more exciting than I hoped it would be, and full credit to them for staying committed to the cause and lifting themselves back into the match.”

Valpo’s defense played outstanding in front of sophomore goalkeeper Nico Campbell (Kingston, Jamaica/St. George’s College), who only faced three shots on goal as he made two saves to improve his record to 4-1-2. Campbell had a chance for his fifth shutout of the season, but a shot from Belm Figueroa took an unlucky bounce over his head in the 61st minute and put the Bruins on the board.

The Crusaders' defense quickly tightened the screw after the lead was cut to one, allowing only two shots in the last 30 minutes. The Brown and Gold’s offensive attack also kept up the pressure on Belmont, with two shots on goal in the 15 minutes following the Bruins' goal.

“Whenever a team carries a two-goal lead into the halftime break, it becomes a fight for the third goal,” Avery said. “If we score, we end the game, but if they score it sets the game on fire. I'm not happy we conceded that goal, but I am pleased that we were able to manage the last half hour and hold on to the win.”

The Crusaders return home to Brown Field with a non-league match on Monday against Dayton. Kickoff is scheduled for 6 p.m. CT; live stats will be available through ValpoAthletics.com. The game will also be broadcast on HorizonLeague.com through the Horizon League Network.