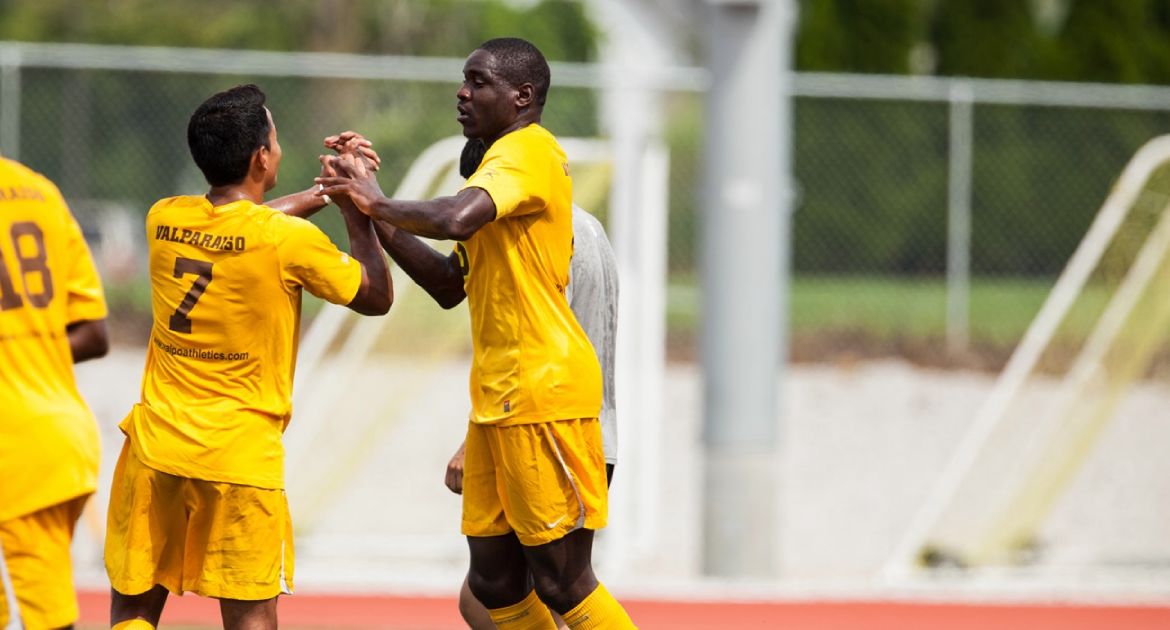 This Week in Crusader Soccer: The Valparaiso men’s soccer team takes a break from Horizon League action to take on in-state foe IUPUI on Tuesday night before returning home to take on league rival Wright State on Friday night to kick off Homecoming Weekend.

Previously: The Crusaders battled Dayton to a 2-2 double-overtime draw tie last Monday at home. The Brown and Gold then dropped a Horizon League match at UIC on Wednesday night, 1-0.

Following the Crusaders: Both matches will have live stats available through ValpoAthletics.com. Over the course of the 2014 season, four matches will have free live video on the Horizon League Network, and WVUR, Valpo’s student radio station, will also be broadcasting select matches. Tuesday night’s match will be streamed live at http://www.iupuijags.com/watch/?Live=344. Friday’s match will be streamed live at HorizonLeague.com through the Horizon League Network.

Head Coach Mike Avery: Mike Avery is in his eighth season at Valpo, with 54 wins to his credit. The 2011 Horizon Coach of the Year led the Brown and Gold to their first-ever conference title in the same season and has posted seven of the top-10 defensive seasons in program history over his first seven seasons. The third coach in Valpo’s history, he owns the best winning percentage and second-most wins in program history. He has coached four Goalkeeper of the Year honorees during that stretch, and has also seen one goalkeeper (Kyle Zobeck) and one defender (Stefan Antonijevic) selected in the MLS Supplemental Draft and go on to play professional soccer.

Series Notes: IUPUI – The Crusaders and Jaguars will meet for the 21st time, with Valpo winning 12 games overall. Last year the Crusaders won a double-overtime thriller at Brown Field, 2-1. Nick Suker scored the game-winner in the 107th minute.

Wright State – This will be the 13th time the Crusaders and Raiders have faced off on the pitch. Last year Valpo lost in Dayton, 2-0.

Scouting the Opposition: IUPUI – The Jaguars are 2-5-1 on the season and 0-1-0 in the Summit League. Emmanuel Usen leads the team with four goals in eight games. The Jaguars have rotated goalies between Christian Lomeli and Eduardo Cortes. Lomeli comes in with a record of 1-3-1, a 1.80 GAA and one shutout to his credit while Cortes has gone 1-2-1 with a 2.80 GAA.

Wright State – The Raiders come to Brown Field with a 7-3-1 record and 2-1 mark in the Horizon League. Eric Lynch comes in with leading the team with five goals and eight assists. Peguy Nghatcha and Jake Stovall each have four goals apiece. Tyler Blackmer will handle the goalkeeping duties for the Raiders, posting five shutouts en route to a 1.22 GAA.

Crusaders Reach New Heights in RPI: Valpo was ranked number nine in last week’s RPI poll. The ranking is the highest ever for the Crusaders. Valpo is 4-2-3 against the RPI top 100, thanks in part to a tough non-league schedule that was ranked 10th in RPI, while their league RPI was 14th.

Déjà Vu for Taublieb: Senior midfielder and captain Zeb Taublieb showed off his offensive prowess two weeks ago, scoring the game-winning goal against Loyola in overtime while giving the Crusaders the lead in the 14th minute against Belmont. Both goals were nearly identical as well, as Taublieb pounced on rebounds off of opposing goalkeepers to send the ball home. Taublieb was honored as the Horizon League Offensive Player of the Week last week as well.

Spark Off the Bench: Freshman midfielder/forward Jordan James has made the most of his opportunities coming off the bench, leading the Brown and Gold with three goals in ten games. Two of those have been match-winners, against Butler and in the home opener against Western Illinois. He leads the team with six points and five shots on goal.

Crusaders Ranked Seventh in Regional Poll: The Brown and Gold dropped three spots to number seven in this week NSCAA/Continental Tire NCAA Division I Men's Great Lakes Region Poll. This comes one week after being ranked fourth, the highest ranking for the Crusaders.

Valpo Receiving Votes: The Crusaders received six votes in the NSCAA/Continental Tire NCAA Division I Men’s National Poll for the week of September 16, the first time the team has received votes.

Protecting the Net: Through ten games this season, the Brown and Gold have only allowed seven goals while playing their trademark suffocating defense. They are 21st in the nation in team goals against average of .63 and are 30th in save percentage with a .825. The Crusaders also top out in several Horizon League categories, including goals allowed (.73) and goals against average (.66). They are also tied for second in shutouts in the Horizon League through all games with four.

Non-Conference Schedule Paying Off: The Crusaders faced a challenging non-league schedule this year, and are now seeing the fruits of their labor as they enter conference play. They took to the road against several big time opponents, including then #7 Michigan State, North Carolina State and Davidson. The Wildcats only blemish on their record is a 2-0 lost to Dayton and upset #2 Virginia two weeks ago. The Spartans only losses have been to the Crusaders and Ohio State and they are currently ranked 19th in the nation.

Senior Spotlight: Throughout the season, the team will honor a senior player at each home game. Last week they recognized they recognized senior defenseman Jack McIver. This week they will honor senior midfielders Diego Calix and Julio Velasquez before Friday’s match against Wright State.

Campbell Garners National Honor: Sophomore goalkeeper Nico Campbell was named to College Soccer News National Team of the Week on September 15 after his stellar performances last week, allowing one goal to Butler and shutting out #7 Michigan State, both on the road.

Lawrence Wins League Honor: Sophomore defenseman Omar Lawrence was named the Horizon League Co-Defensive Player of the Week for the week of September 15 following his game-winning goal at #7 Michigan State and helping the Crusader defense shutout the Spartans and hold Butler to one goal.

#oneVALPO: Throughout this season, the Crusader men’s soccer program will be promoting its #oneVALPO campaign, a campaign to celebrate diversity, via social and digital media and at its games. The first four videos are available at http://youtu.be/Mpv9DL1mLlg, http://youtu.be/9E5NO1YchEg, https://www.youtube.com/watch?v=iG5coYUdKQw&list=PLTxRmOti-0BMlxucHOzE4siq5uNWRDa8D and https://www.youtube.com/watch?v=gj2qonQaHQ4.