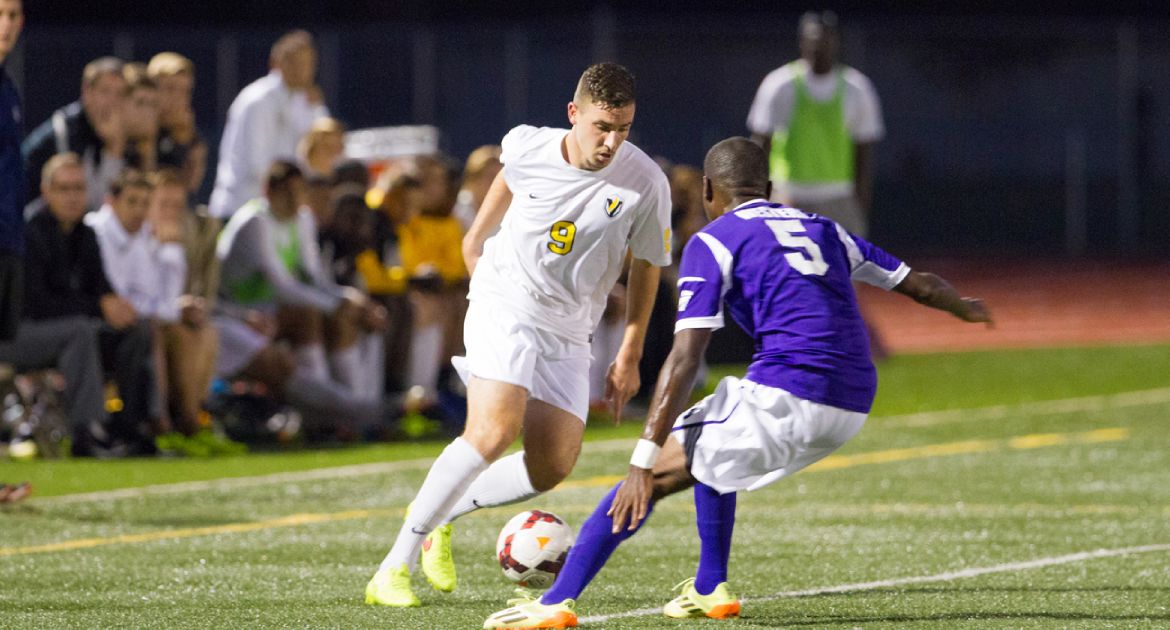 Jordan Aidoud prepares to make his move on a defender
WSU at Valparaiso | October 10, 2014

The Valparaiso men’s soccer team made it known to the Horizon League that they will not go down lightly, scoring five second half goals to knock off second place Wright State, 5-2.

The comeback for the Crusaders started just under a minute after the Raiders had gone up 2-0 in the 52nd minute. In what would be a very intense and emotional second half, Valpo was awarded a penalty kick in the 53rd minute. Just as in their previous game against IUPUI, junior midfielder Jordan Aidoud (Lyon, France, CEFAM) stepped up to the line and sent one to the right of the goalie to cut the lead to one.

“It was an interesting game, to say the least, and one that is still a bit hard to figure out exactly what happened,” said Crusader head coach Mike Avery. “I thought we were playing pretty well at home against a good Wright State team, we maybe even had a bit of the edge in terms of how the game was going, and then all of a sudden we were down two goals. To come back so emphatically was certainly exciting to watch.”

The intensity grew more as the game went on and the temperature fell. A series of Wright State yellow cards and a red card on the Raiders goalkeeper led to a free kick from 22 yards out in the 77th minute. With the crowd of 600 plus on its feet at full throat, senior midfielder Nick Suker (Downers Grove, Ill./South) faked the shot and passed it off to linemate Aidoud, who blasted it into the upper right corner past the green goalkeeper to even the score at two with his second of the game and third of the season.

In the 89th minute, freshman Stian Sandbekkhaug (Ottawa, Ontario, Canada/Frisco Liberty) would put the icing on the cake after taking Julio Velasquez’s (Albuquerque, N.M./Cibola) pass and sending a strike to the upper right corner and give the Crusaders the two goal lead. He would add another one just 34 seconds later, this time taking a breakaway pass from Aidoud and beating his defender for his third goal on the season.

Sophomore goalkeeper Nico Campbell (Kingston, Jamaica/St. George’s College) improved his record to 6-2-3 while making one save. The Crusader defense allowed only three shots on goal and eight overall.

The Crusaders have not dropped a match at Brown Field yet this season through four games, the longest stretch for the Crusaders under Avery.

“We wanted to accomplish a few things tonight - first we wanted to continue to protect our home field,” Avery said. “We've survived four home games now without a loss on Brown Field, and as we play four of our final six regular season games at home, the ‘home field advantage’ mentality is important to maintain. Second, and most importantly, we wanted to try and secure three more points in the league race. In the final analysis, it was a very good night for us.”

Valpo (7-2-3, 2-1-0) continues league action on Wednesday when they host Detroit, kick off is set for 7:30 pm CT. The match will be broadcast via the Horizon League Network on HorizonLeague.com and live stats will be available through ValpoAthletics.com.