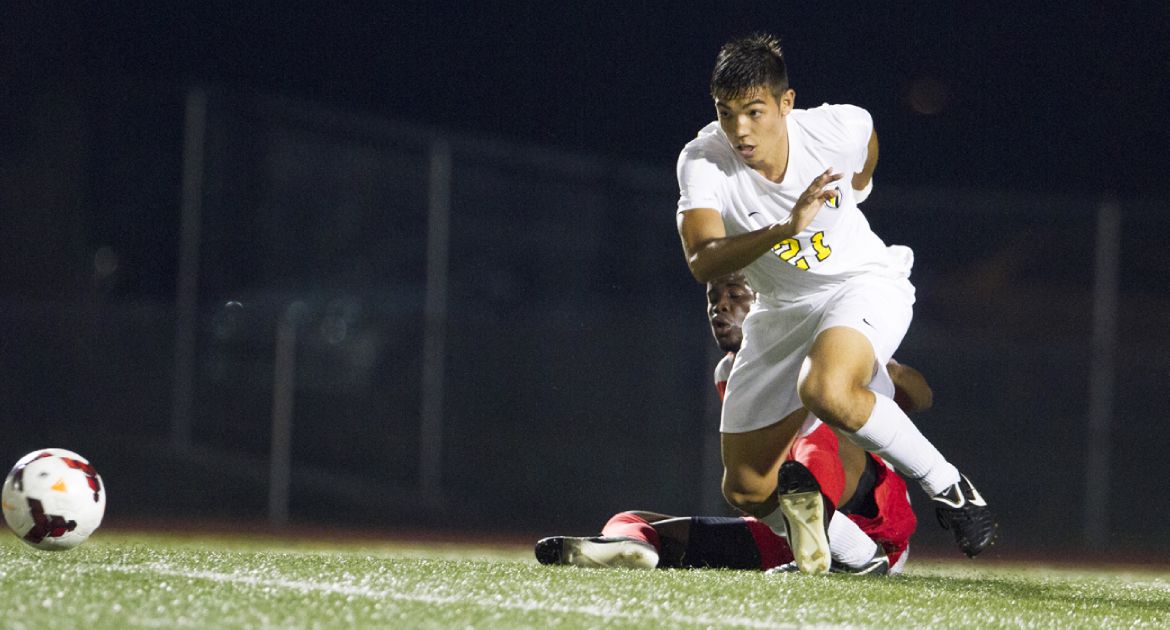 Stian Sandbekkhaug runs after the ball after beating his defender
Detroit at Valparaiso | October 15, 2014
Valparaiso at Cleveland State | October 18, 2014

This Week in Crusader Soccer: The Valparaiso men’s soccer team goes into the home stretch of league play as they welcome Detroit on Wednesday night before making the trek east to take on Cleveland State Saturday night.

Previously: The Crusaders got back to their winning ways with a non-league 3-1 win against IUPUI before storming back against Wright State to win a 5-2 thriller. Jordan Aidoud and Stian Sandbekkhaug led the team with three goals apiece, while Matt Gweh returned from injury against the Jaguars to score in his first game back.

Head Coach Mike Avery: Mike Avery is in his eighth season at Valpo, with 56 wins to his credit. The 2011 Horizon Coach of the Year led the Brown and Gold to their first-ever conference title in the same season and has posted seven of the top-10 defensive seasons in program history over his first seven seasons. The third coach in Valpo’s history, he owns the best winning percentage and second-most wins in program history. He has coached four Goalkeeper of the Year honorees during that stretch, and has also seen one goalkeeper (Kyle Zobeck) and one defender (Stefan Antonijevic) selected in the MLS Supplemental Draft and go on to play professional soccer.

Series Notes: Detroit – This will be the 19th time the Titans and Crusaders have squared off on the pitch, with Valpo winning ten of those matches. Last year at Brown Field, the Crusaders won a tight battle, 1-0, for their seventh win in a row against Detroit.

Cleveland State – For the 18th time the Crusaders and Vikings will meet on the field. Valpo won a tight game last year in Cleveland when they scored in the 87th minute to go ahead 1-0.

Scouting the Opposition: Detroit – The Titans come to Brown Field with a 6-4-2 record overall and are 3-1-0 and sit in second place currently in the Horizon League. Spiro Pliakos leads the team with 12 points as he shares the team lead in goals (three) and leads the team in assists (six). Nathan Steinwascher comes into the match with a 6-4-1 record while only giving up 13 goals in 11 games and has three shutouts to his credit. The Titans average almost 12 shots a game while averaging 1.33 goals per game.

Cleveland State – The Vikings are 4-7-0 overall and sit at 2-1-0 in the Horizon League. Dan Koniaczyk, Sergio Manesio, and Alvaro Pichardo each have two goals apiece. In goal, Nick Ciraldo comes in a 2.06 goals against average while earning two shutouts.

Aidoud Earns League, National Honors: Junior midfielder Jordan Aidoud exploded for three goals last week against IUPUI and Wright State and was named the Horizon League Offensive Player of the Week. He was also named to Top Drawer Soccer Team of the Week for his efforts. He scored two of his goals via penalty kicks, while his third tied the game against the Raiders en route to a 5-2 Crusader win.

Crusaders Ranked Again: The Brown and Gold were ranked 22nd in this week’s Soccer America Top 25 poll and 25th in Top Drawer Soccer’s poll. Valpo is the only Horizon League team to be represented in either poll.

Crusaders Ranked 15th in RPI: Two weeks after being achieving their highest RPI ranking ever, the Crusaders find themselves at #15 this week. Valpo’s non-league RPI comes in at number nine, while their league RPI sits at #14. The Brown and Gold are 4-2-2 against the top 100, while going 5-1-3 in non-league action. Valpo has faced six top 50 teams, including Northwestern (16), Michigan State (21), Dayton (38), UIC (42) and Butler (50).

Crusaders Ranked Sixth in Regional Poll: The Brown and Gold moved up one spots to number six in this week’s NSCAA/Continental Tire NCAA Division I Men's Great Lakes Region Poll. They are joined in the poll by league rival Wright State, who the Crusaders just defeated, 5-2, last Friday.

Taublieb Garners League Honor: Senior midfielder and captain Zev Taublieb was named the Horizon League Offensive Player of the Week for the week of September 29 after showing off his offensive prowess. He scored the game-winning goal against Loyola in overtime while giving the Crusaders the lead in the 14th minute against Belmont. Both goals were nearly identical as well, as Taublieb pounced on rebounds off of opposing goalkeepers to send the ball home.

Spark Off the Bench: Freshman midfielder/forward Jordan James has made the most of his opportunities coming off the bench, as he is tied for the team lead in goals with three. Two of those have been match-winners, against Butler and in the home opener against Western Illinois.

Valpo Receiving Votes: The Crusaders received six votes in the NSCAA/Continental Tire NCAA Division I Men’s National Poll for the week of September 16, the first time the team has received votes.

Protecting the Net: Through 12 games this season, the Brown and Gold have only allowed 10 goals while playing their trademark suffocating defense. They are 29th in the nation in team goals against average with a .76.

Senior Spotlight: Throughout the season, the team will honor a senior player at selected home games. Last week they recognized they recognized senior midfielders Diego Calix and Julio Velasquez. Next week, the Crusaders will honor midfielder Zev Taublieb and defenseman Jacob Unger before their game against Milwaukee.

Campbell Garners National Honor: Sophomore goalkeeper Nico Campbell was named to College Soccer News National Team of the Week on September 15 after his stellar performances last week, allowing one goal to Butler and shutting out #7 Michigan State, both on the road.

Lawrence Wins League Honor: Sophomore defenseman Omar Lawrence was named the Horizon League Co-Defensive Player of the Week for the week of September 15 following his game-winning goal at #7 Michigan State and helping the Crusader defense shutout the Spartans and hold Butler to one goal.