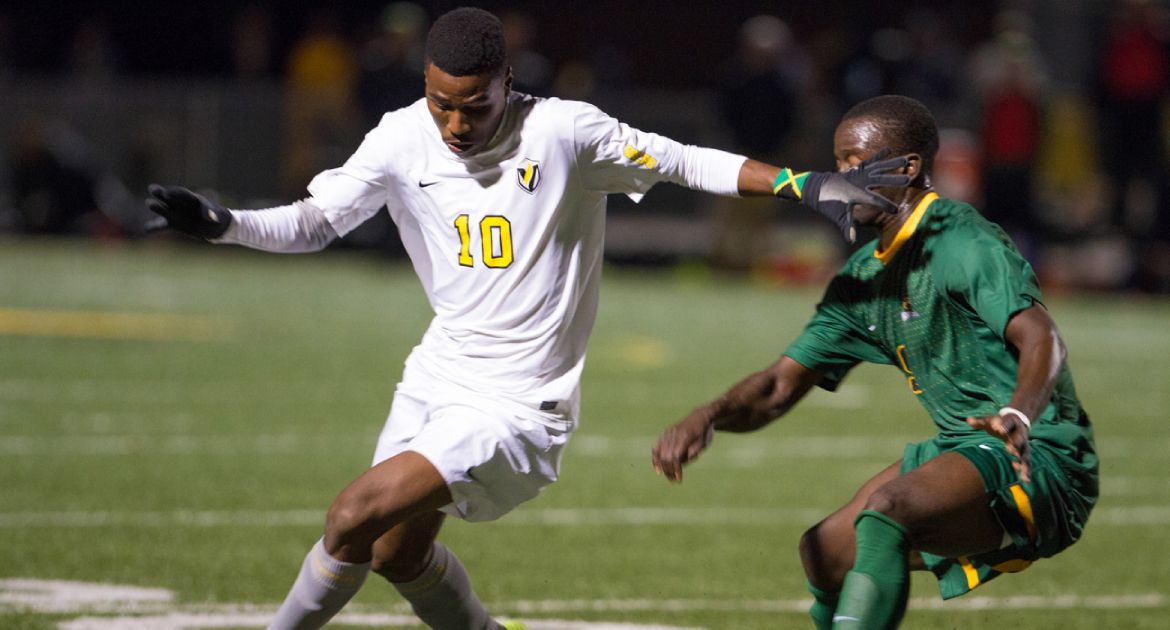 Ramone Howell holds off a defender as he controls the ball
Detroit at Valparaiso | October 15, 2014

With a steady rain all evening, the Crusaders battled to get their footing on the slick turf. The Titans were able to strike quickly, as Matt Harkema took a pass from Spiro Pliakos inside the box and sent it just out of the reach of sophomore goalkeeper Nico Campbell (Kingston, Jamaica/St. George’s College) to go ahead in the 17th minute.

“Full credit to Detroit tonight as they made the game very difficult for us,” Crusader head coach Mike Avery said. “We never really found any attacking rhythm and ultimately tried to change the way we play, which is not something a good team should have to do.  We've had some success this year, but the bottom line is that we still have some learning to do, and games like this are valuable resources for that learning.”

The Brown and Gold quickly went on the counter attack, with a shot from defender Omar Lawrence (Kingston, Jamaica/Excelsior) going high just over a minute later. In the 20th minute, freshman midfielder Ramone Howell (Portmore, Jamaica/Jamaica College) blasted one towards the net, but was stopped by Titans goalkeeper Nathan Steinwascher.

The Crusaders kept the pressure up in the second half, as sophomore Matt Gweh (Apple Valley, Minn./Eastview) had an tremendous chance with his header off of junior midfielder Jordan Aidoud’s (Lyon, France/CEFAM) corner kick in the 64th minute, but a Titan defender headed it out before it could find its way home.

With just under ten minutes left to go in regulation, Aidoud was tackled in the box by Steinwascher, drawing a penalty kick. Already two for two on the season, Aidoud stepped up and took the shot, but it went high.

Campbell finished with five saves as his record dropped to 6-3-3.

“It wasn't all bad tonight, though, and there are still plenty of positives we can take from the game once the sting of a loss fades away,” Avery said. First, we battled all 90 minutes, even when things weren't necessarily going our way. That kind of spirit will serve us well through the final portion of the season. Second, we get another chance to play right away.  That's always the best cure for a tough game. We will put this one behind us immediately and get to work tomorrow to prepare for a very good Cleveland State team. Cleveland is a totally different challenge in that they play a very different style than Detroit. I'm interested to see how we respond - so far this season we've been able to bounce back from disappointment pretty well so I am sure we will be ready to go on Saturday night.”

Valpo (7-3-3, 2-2-0) returns to action Saturday when they travel east to battle with Cleveland State in Horizon League action. Kickoff is set for 6:00 pm CT. The game will be broadcast on the Horizon League Network via HorizonLeague.com and live stats will be available through ValpoAthletics.com.