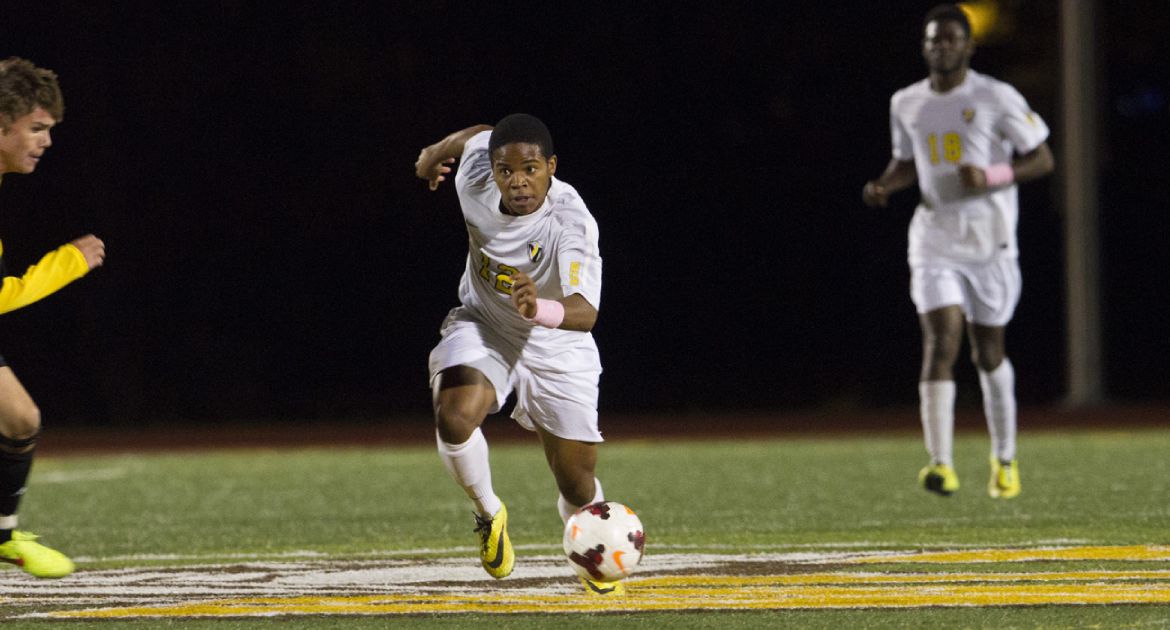 Suleiman Thomas looks to go on the attack for the Crusaders
UWM at Valparaiso | October 25, 2014

The Crusaders got on the scoreboard first thanks to a strike from freshman midfielder Ramone Howell (Portmore, Jamaica/Jamaica College) in the 34th minute. Howell jumped on the ball from 20 yards out and sent to the left of goalkeeper Liam Anderson.

The Panthers would not go quietly into the night however, as Laurie Bell corralled his own rebound off a blocked shot and sent one just left past sophomore goalkeeper Nico Campbell (Kingston, Jamaica/St. George’s College) to tie the game in the 67th minute.

“It was a tough game, pretty evenly played, and a game that you might expect at this time of the year with everyone trying to stay alive in the conference race,” Crusader head coach Mike Avery said. “The game didn't really have any rhythm and it seemed like there were more whistles blown than passes connected, but sometimes games are like that and we have to find a way to win all types of games. We had a few good looks to win it, and their goalkeeper made one tremendous point blank save near the end to keep the game tied, but the bottom line is that we weren't quite sharp enough in key moments.”

Valpo turned up the offensive attack in the last 20 minutes, sending five shots towards the Panthers net, but couldn’t find their mark. Sophomore defenseman Omar Lawrence (Kingston, Jamaica/Excelsior) and Howell both had quality chances in the 71st and 79th  minute that found the arms of Anderson.

In the first overtime period, the Crusaders had several opportunities to win the game, but couldn’t connect. A throw-in from senior defenseman Jacob Unger (Apex, N.C./Middle Creek) bounced around in the box for several seconds before a Panther defenseman cleared it out.

Junior midfielder Jordan Aidoud (Lyon, France/CEFAM) had a header blocked out and sent a corner into the box that was cleared in the 108th minute as the Crusaders tried to find the net in the closing minutes.

Campbell finished the game with seven saves as the Panthers fired off 17 shots. He made two big saves in overtime to keep the game tied.

“The good news is that we earned another important point, and while we wish it had been all three, it puts us in good shape to qualify for the post season with two games remaining,” Avery said. “We still have some work to do, but we are in a position where our fate is in our own hands.  Our first goal for the year has always been to qualify for the post season. Everything else follows that goal, and it is still very much within reach. It should be an exciting final few weeks of the regular season.”

Valpo (8-3-4, 3-2-1) returns to the pitch on Wednesday when they take a late-season break from league play to take on in-state foe IPFW at Brown Field. Kickoff is set for 7:30 pm CT, with live stats available through ValpoAthletics.com.