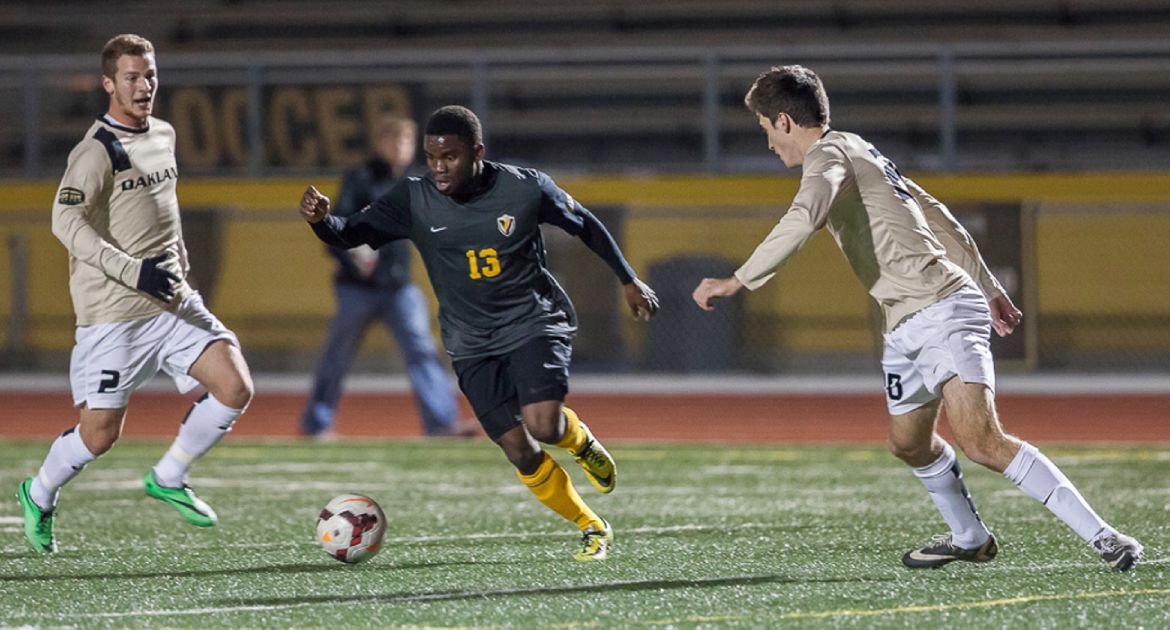 Matt Gweh's goal in the 38th minute tied the game for Valpo
OAKLAND at Valparaiso | November 07, 2014

The Valparaiso men’s soccer team battled to a 2-2 double-overtime draw against Oakland on cold Friday night at Brown Field. With the tie, they clinch the number five seed in the Horizon League and will play Cleveland State on Monday in the league tournament.

“First and foremost, we want to congratulate Oakland on a tremendous conference season,” Crusader head coach Mike Avery said. “To get through the Horizon League without a loss is a tremendous accomplishment, and they are a very deserving number one seed. I also want to congratulate my guys on qualifying for the post season tournament. It's dangerous to take that for granted in a league as competitive as ours.”

The Crusaders found themselves down early after a header by Cody Archibald off of Matt Dudley’s corner put the Golden Grizzles ahead in the 8th minute. Valpo would respond quickly though, as senior Nick Suker (Downers Grove, Ill./South) pounced on the rebound off his own blocked shot to tie it up just two and a half minutes later.

Just over seven minutes later, Oakland would strike again; this time off a pass from Gerald Ben found the foot of Shawn Claud Lawson and snuck by the hand of sophomore goalkeeper Nico Campbell (Kingston, Jamaica/St. George’s College) to put the visitors up by one.

The Brown and Gold would not let their tournament hopes slip away in their home finale however, as freshman midfielder Ramone Howell (Portmore, Jamaica/Jamaica College) found sophomore Matt Gweh (Apple Valley, Minn./Eastview) on a fast break and he blasted one to the left of Golden Grizzles keeper Wes Mink to knot it up at two in the 38th minute.

The Crusader defense would tighten the screws in the second half, only allowing two shots on goal and not allowing any in the two overtime periods. Campbell would finish the game with three saves.

Valpo had several quality chances to take the lead, but couldn’t find the back of the net. Freshman forward Stian Sandbekkhaug (Ottawa, Ontario, Canada/Frisco Liberty) had a good look in the 84th minute that sailed to the right of the goal. Gweh had his shot saved by Mink in the 95th minute and sophomore forward Suleiman Thomas (Chicago, Ill./Lake Forest Academy) had his shot go right of the goal in the closing seconds of the first overtime.

The Crusaders now look forward to postseason play on Monday, Nov. 10 in the Horizon League Championships, when they travel to fourth seed Cleveland State. Kickoff is set for 6:00 pm CT. Live stats will be available through ValpoAthletics.com and the game will be streamed via the Horizon League Network.

“We now get to put the regular season behind us and start anew in the post-season,” Avery said. “A game at Cleveland State is always something we enjoy - they are a good team and they play an attractive style. We always have tight matches with them and I would expect Monday night to be no different.”