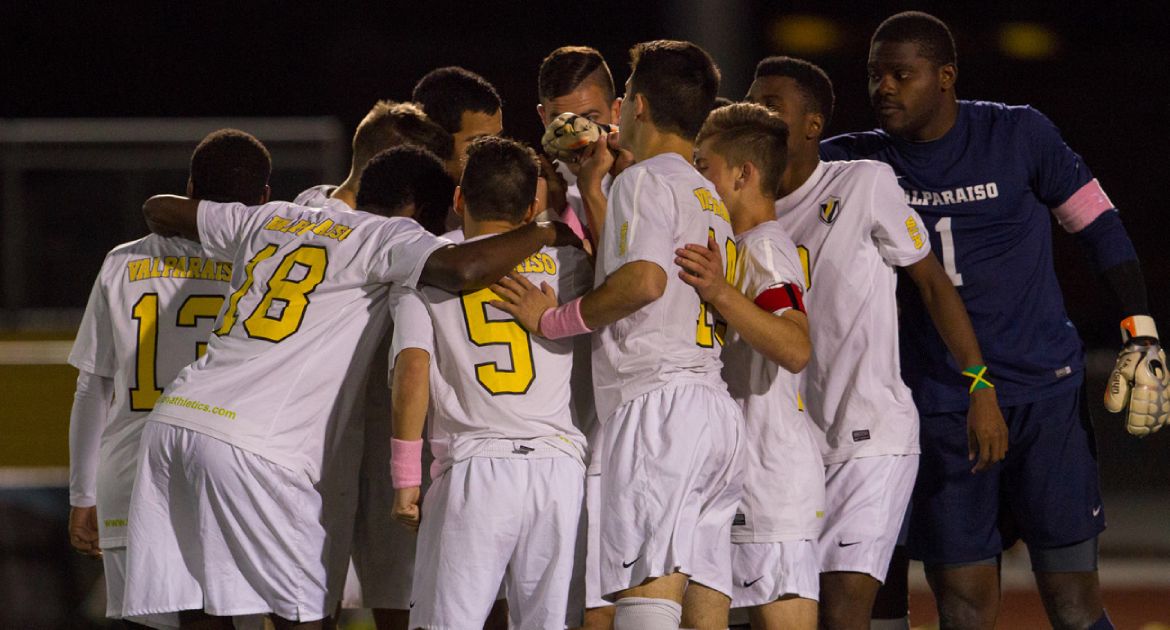 This Week in Crusader Soccer: The Valparaiso men’s soccer begins postseason play as they travel to Cleveland State in the first round of the Horizon League Championships.

Previously on the Pitch: Valpo fought to a 2-2 double-overtime draw against Oakland last Friday night at Brown Field to close out the regular season. Nick Suker and Matt Gweh each scored game-tying goals in the 9th and 38th minute.

Following the Crusaders: Monday’s match will have live stats available through ValpoAthletics.com. The match will also be streamed via the Horizon League Network at HorizonLeague.com.

Series Notes: Cleveland State – This will be the 19th meeting between the Crusaders and Vikings and the second time this season. Valpo won in Cleveland on Oct. 18, 1-0 behind Jordan Aidoud’s fourth goal of the season. This marks the second time they have met in the Horizon League Championships, with the Vikings squeaking out a 1-0 victory in the first matchup at Detroit in the semifinals in 2012

Scouting the Opposition: Cleveland State – The Vikings finished the regular season 6-11-0 and 4-4-0 in the Horizon League, finishing fourth in the league. Sergio Maneiso leads the team with four goals and nine points while starting all 17 games. In goal, Nick Ciraldo has started 15 games while allowing 30 goals for a goals against average of 1.98. He has recorded two clean sheets on the season.

Another Trio of Awards: Three Crusaders were named to the College Sports Madness Horizon All-Conference Teams on Monday. Junior Jordan Aidoud and senior Eric Nieto were both named to the First Team as midfielder and defenseman, respectively, while senior captain Zev Taublieb was named to the Second Team. Nieto was selected as a Second Team member last year as well.

Valpo in the Tournament: Since joining the Horizon League in 2008, the Crusaders are 2-5-1 in the league championships, advancing past the first round in 2012 and 2009. In 2011, when Valpo hosted the championships, they battled to a scoreless double-overtime draw with Loyola before losing 5-4 on penalty kicks. Last year the Crusaders fell to Oakland in a first-round match, 2-1. Nick Suker scored the lone goal for Valpo in the 33rd minute.

Stone Wall: Nico Campbell leads the Horizon League with a goals against average of .86, only allowing 15 goals through 16 games and 1,574 minutes played and is second in save percentage with .789.

Protecting the Net: Through 17 games this season, the Brown and Gold have only allowed 15 goals while playing stifling defense.  They are 50th in the nation in team goals against average with a .87.

Non-Conference Schedule Paying Off: The Crusaders faced a challenging non-league schedule this year, and are now seeing the fruits of their labor through league play. They took to the road against several big time opponents, including then #7 Michigan State, Northwestern and Davidson. The Spartans’ only losses have been to the Crusaders, Ohio State, Oakland and Michigan. They are ranked 21st in the NSCAA/ Continental Tire NCAA Division I Men’s National Poll. Northwestern is 8-3-5, third in the Big Ten and ranked 16th in the NSCAA poll. Davidson upset #2 Virginia on Sept. 24.

Sparks Off the Bench: Freshman forwards Jordan James and Stian Sandbekkhaug have made the most of his opportunities coming off the bench. They are both tied for second on the team in goals with three. Two of James’ goals have been match-winners, against Butler and in the home opener against Western Illinois.