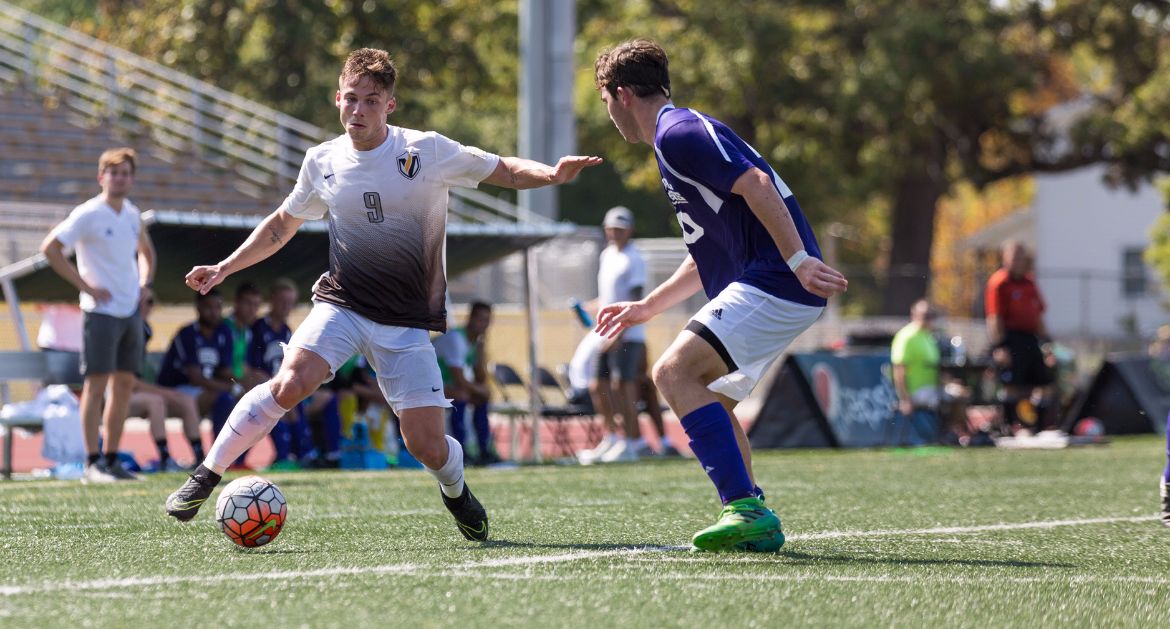 This Week in Crusader Soccer: The Valparaiso University men’s soccer team will hit the road for a pair of matches this week as the Crusaders visit Missouri State in a Valley showdown on Saturday evening before heading to Northern Illinois to clash with the Huskies on Tuesday night. After Tuesday, Valpo will have played nine of its 11 matches this season on the road.

Following the Crusaders: Saturday’s game against Missouri State will air on The Valley on ESPN3, while Tuesday’s match will have video available behind a paywall. Links to live video and stats for both matches are available on ValpoAthletics.com.

Scouting the Opposition – Missouri State: The Bears enter this match ranked sixth in the West Region by the United Soccer Coaches. They have prevailed in both Missouri Valley Conference fixtures thus far, defeating Central Arkansas 2-1 and Evansville 1-0. Conor Ingram won the MVC Offensive Player of the Week award each of the last two weeks, becoming the first Missouri State men’s soccer player to earn that distinction in consecutive weeks since 2009. Ingram has scored in each of the last five games. He’s the first Bear in the last 17 years to score in five straight games. He has scored the game-winning goal in each of the last three matches, propelling Missouri State to a four-game winning streak. The Bears were picked to finish third in The Valley preseason poll. They are under the direction of longtime head coach Jon Leamy, who has been in charge of the program since 1992. The Bears have scored just eight goals this season, but they’ve prided themselves on stingy defense – allowing only four goals.

Series Notes – Northern Illinois: Valpo will meet a Northern Illinois team that it hasn’t played since 2012. That most recent match with the Huskies was Valpo’s first win in the head-to-head series, snapping a nine-game skid. The Crusader prevailed 2-1 at Brown Field. This is Valpo’s first trip to DeKalb since 2011, a 1-0 loss to a Huskies team that was ranked 20th nationally. Valpo will attempt to secure its first win at NIU after falling in the first five trips – 1985, 1991, 1993, 2004 and 2011.

Scouting the Opposition – Northern Illinois: The Huskies are set to play their third Missouri Valley Conference foe of the season and also played two exhibitions against Valley squads. Northern Illinois has yet to beat an MVC team, dropping exhibitions to Loyola and Drake before losing regular season games to Bradley (2-1) and Evansville (4-1). Jon Maertins leads the team with four goals and nine points. The Huskies have already surpassed their 2016 win total after going 2-10-4 a season ago. Northern Illinois was picked to finish sixth of six in the MAC preseason poll.

Spreading It Out: In Tuesday’s win over IUPUI, junior Alex Brown became the ninth different Crusader to score this season. Valpo features the second-most goal scorers in the Missouri Valley Conference, behind only Evansville, which has had 11 different players score. Missouri State is on the other end, with a league-few three goal scorers. Since the start of the 2016 season, Valpo has had 17 different players score goals.

Keeping It Close: Fans who enjoy close matches have been in luck when watching Crusader men’s soccer this season, as none of the team’s nine games have been decided by more than one goal. Laughers have been non-existent for the Crusaders, as Valpo is the only team in the MVC that hasn’t played in a game decided by two goals or more this year. This isn’t new to the Crusaders, who started the 2014 season with 10 straight matches that were either decided by one goal or tied.

Immediate Impact: Alex Brown didn’t take long to make his presence known, scoring the game-winner in just his second appearance in a Valpo uniform and first start as a member of the Crusaders on Tuesday night. He became the second Valpo player this season to score a game-winner as the first goal of his Crusader career, joining Jonas Engler. You don’t have to go far back to find another Valpo player who scored a match-winning goal in his first career start either, as Kendan Anderson did so against Eastern Illinois last season.

Clean Sheet: The Crusaders have had numerous successes so far this season, but one feat that had eluded the team before Tuesday was turning in a shutout. Valpo didn’t have a clean sheet in its first eight games of the year for the first time since 1999. The program had previously turned in at least one shutout over the first four matches of the year every season under Mike Avery. The Crusaders achieved the objective of keeping IUPUI off the scoreboard as Nacho Miras earned his first career clean sheet in Tuesday’s 1-0 victory.

Garcia’s Rise: After Tuesday’s match, sophomore Adan Garcia is tied for the MVC lead with three assists. He has seven points this season to lead the Crusaders and is the only player on the team with multiple goals and multiple assists. He has already surpassed his season totals from a year ago, when he had no goals and two assists.

Head Coach Mike Avery: In his 11th season at the helm of the Crusader men’s soccer program, Mike Avery owns a program-record 78 career victories. Under Avery's guidance, the Crusaders have been a stellar defensive side, as eight of the top nine defensive seasons in program history have come during his tenure. Avery has led the Crusaders to a new standard in his time as head coach, as a program that had enjoyed just one winning season in the 24 years prior to his arrival has finished above the .500 mark in six of the last eight years. He has also seen numerous players go on to play professional soccer, including active pros Zev Taublieb, Kyle Zobeck, Stefan Antonijevic, Jordan Aidoud and Nico Campbell. Avery shattered the program record with his 77th career victory on Sept. 16 at Drake. Avery reached 77 victories in his 195th career match, while previous record holder Mis’ Mrak needed 288 matches to accumulate 76 wins

Comeback Crusaders:  The Crusaders put together a noteworthy comeback on Sept. 16 at Drake, erasing a 2-0 hole to beat the Bulldogs 3-2. That was only the second time during Mike Avery’s 11 years in charge of the program that Valpo has come from two goals down to win a match. The first was Oct. 10, 2014, when Valpo trailed Wright State 2-0, then rallied for five unanswered goals in the second half to win 5-2. Prior to 2014, Valpo hadn’t won after trailing by two goals since Sept. 27, 2006, a 5-4 win over Evansville.

Looking Ahead: Following the Northern Illinois match, the Crusaders come back home on Saturday, Oct. 7 to host Evansville at 7 p.m. in MVC play.

Fresh Faces: This season marked the debut of a new-look Valpo roster, as the Crusaders have experienced extreme turnover after carrying a senior-laden team in 2016. Only 10 players return who saw game action a year ago, and four of those appeared in eight games or fewer. The Crusaders had 14 players depart, 12 of whom appeared in 12 games or more. Crusader fans will have to keep their roster handy as they watch a team that features 19 newcomers this year. Just five of Valpo’s 31 goals in 2016 were scored by players who are back in 2017. Of the 11 players who started the season opener at Northwestern, only one started the 2016 season finale (Adan Garcia). Five of the 11 starters and six players in total made their Valpo debuts in the match.

Crusaders Picked Sixth in Preseason Poll: Valpo was picked to finish sixth of seven in a preseason poll of the conference’s head coaches. The Crusaders garnered 15 points in the poll, edging out Bradley (14) for sixth and narrowly behind fifth-place Drake (18). Defending regular season champion Loyola collected five of the seven first-place votes.

Howell Honored: Senior midfielder Ramone Howell represented Valpo on the 2017 Missouri Valley Conference Preseason All-Conference Team. Howell scored three goals and dished out two assists in 14 matches for the Crusaders a year ago. He totaled 33 shots, 14 of which were placed on goal. He is Valpo’s only returning player who scored more than one goal last season.

Looking Back at 2016: Last season, the Crusaders racked up 10 victories, matching the program record for wins in a single season. Following the campaign, they said goodbye to a deep and talented graduating class. Goalkeeper Nico Campbell finished with 22 career shutouts, one shy of a program record. Isaiah Madrid finished the season with 10 goals and 25 points, becoming just the sixth Valpo player to score double-figure goals in a single season and the first to reach 25 points in the last 25 years. Kendan Anderson turned the fastest hat trick in NCAA history on Oct. 31 against IUPUI, scoring three times in 1:21. The season ended as Milwaukee advanced on PKs following a first-round draw with Valpo in the Horizon League Tournament. Valpo was on the road 12 times, tying with two other Division I teams for the most road games, going 6-4-2 away from Brown Field. The team scored 31 goals, allowed 18 and notched seven shutouts.

Seasoned Staff: The Valparaiso men’s soccer coaching staff has the unique distinction of having four coaches (three assistants) with collegiate head coaching experience. Chris Pfau is in his first season as Valpo’s top assistant after spending the last six seasons as the head women’s coach at the University of Houston. Pfau has also guided women’s teams at Akron (2008-12) and Evansville (2005-06). Fourth-year assistant David Stroud was the head coach at St. Joseph’s College from 2011-13, while Brendan Roth spent the 2016 season in charge of Calumet College’s program. Valpo is the only team in The Valley with four individuals with head coaching experience on its staff.

Flying Many Flags: Head coach Mike Avery and his coaching staff have continued to pull from all over the world for players to comprise the Crusader men’s soccer squad. This year’s roster features players from 10 countries and 13 total players born outside the United States. In addition, the following states are represented – Kansas, Ohio, Indiana, Texas, Missouri, Maryland, California, Illinois.

#oneVALPO: The Crusader men’s soccer program will continue to promote its #oneVALPO campaign, which celebrates diversity, via social and digital media and at its games. For more information, go to the #oneVALPO Facebook page at https://www.facebook.com/oneVALPO.

Crusaders Working with TOCO: Valpo will once again raise funds for They Often Cry Outreach (TOCO) this year. Throughout the 2017 season, the Crusaders are working to raise money and awareness for TOCO’s work through sport with at risk children in the Caribbean and United States. As part of this effort, men’s soccer will be working with Valpo volleyball to fund a future international service trip, bringing the student-athletes of these two teams to the Caribbean to get on the ground with TOCO and work directly with children the charity supports.