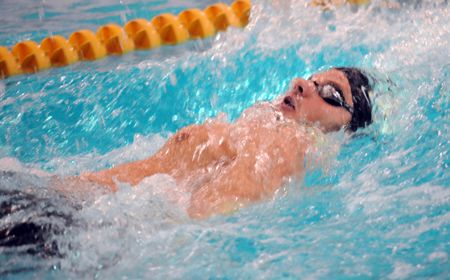 Valparaiso wrapped up the second day of the 2010 Horizon League Swimming and Diving Championships on Thursday evening and remain in sixth place at the Flames Natatorium in Chicago, Ill.

The Crusaders have tallied 78 points through two days of action.  Milwaukee leads the meet with 278 points, four points ahead of UIC and seven ahead of Cleveland State.  Wright State is fourth with 225 points followed by Green Bay with 208 points.

In the morning preliminaries, Sivak just missed out on qualifying for the finals in the 500 free.  His time of 4:44.97 was 0.01 seconds shy of the final qualifying spot.  Trimpe finished three spots behind Sivak in the event with a time of 4:46.73, moving into fourth place on Valpo’s all-time list.

Hunter posted Valpo’s fastest time in the 50 free prelims, finishing in 22.13 seconds, but did not qualify for finals either.

Valparaiso will return to the water for day three of competition on Friday.  Preliminary heats begin at 10:30 a.m. with the evening’s finals starting at 5:30 p.m.