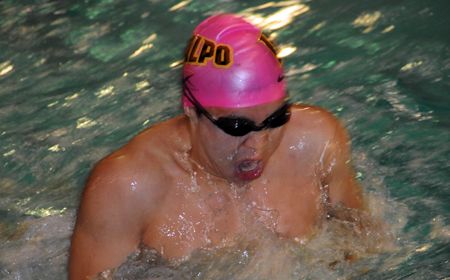 Toshko Ganzorigt is one of two seniors on this year's men's roster.
Related Links

The season opens on October 3 in Indianapolis, Ind. as the Crusaders swim against Butler, Saint Louis, Evansville, and IUPUI.  A week later, Valpo heads to a pair of relay invitationals, one hosted by Notre Dame and another at Ball State.

The home slate opens October 16 with a dual meet against Horizon League foe Milwaukee before Cleveland State visits the ARC pool six days later.  The Purdue Invitational and a dual meet at Wright State will prepare the Crusaders for the Coers Invitational hosted by Ball State just before Thanksgiving.  The first half of the schedule concludes December 2-4 at the Calvin Invitational.

Returning from winter break, Valpo will host Green Bay on January 14 and UIC on January 22, sandwiched around a meet at IUPUI with the Jaguars and Saint Louis.  The Brown and Gold head back to Butler on January 23 for a six team meet before hosting IUPUI on January 29 in the Senior Meet.

The dual meet portion of the schedule concludes February 5 at Western Illinois with the Leathernecks and Monmouth before heading to Cleveland, Ohio for the Horizon League Championships February 23-26.