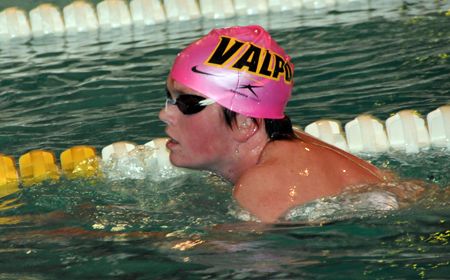 Steve Booth and the Crusaders open the season on Sunday. (Ray Acevedo)

As the Valparaiso University men’s swim team dives into the water for the 2010-2011 season, head coach Howard Hunte has a roster that is larger than years past.  The Crusaders return eight swimmers from last year’s squad which finished sixth in the Horizon League, and Hunte has added six freshmen and two transfers to the squad as well.

Just two seniors are on the Crusader roster as the year opens, led by David Sivak.  The Northwest Indiana native enters the year the school record-holder in four individual events as well as having been a member of all five relay records.  Sivak set the 100 backstroke record last year, and also holds marks in the 100 and 200 freestyle as well as the 200 individual medley, and will look to add even more to his resume this season.

The other senior on this year’s roster is Toshko Ganzorigt.  A native of Mongolia, Ganzorigt joined the program upon arriving at Valpo and has been a team leader with his work ethic.  A breaststroke specialist, he posted a career best time in the 100 event last year.

A trio of returning juniors will be called upon for upperclass leadership as well.  Trevor Trimpe moved on to the top-10 career charts in both breaststroke events last season, and ranks fifth all-time in the 200 breast after posting a time of 2:14.66 at the Horizon League Championships.  Austin Hunter turned in Valpo’s top 200 backstroke time one year ago, and will look to again set the pace in both the back as well as the 100 butterfly.  He ranks fifth in school history in the 100 fly after touching the wall in 53.04 seconds last season.  Thomas Patrick, the third junior on the roster, is a freestyler as well as a flier.  He turned in career bests in the 100, 200, and 500 free a year ago as well as the 100 fly.

Three sophomores return to the roster as well, all with a year’s experience of collegiate swimming under their belt.  Kevin Fedde made an immediate impact on the squad in his rookie season, posting the team’s top time in both the 1000 and 1650 freestyle.  His mile time already ranks fourth on the Crusader all-time list while his 1000 free mark is second best in school laurels.  Steve Booth and Ryan Burling both added depth in the freestyle events for Valpo during their freshman campaigns while Burling also swam both breaststroke events.

A pair of transfers join the Crusader program this season, and hope that their experience in the collegiate setting can help the Brown and Gold climb the Horizon League ladder.  Russell Deghi arrived at Valpo from Cal State Northridge and has two years of eligibility remaining.  He earned the Big West Conference Sportsmanship Award for his school as a sophomore, and will compete in the freestyle events for Valpo this season.  Guillermo Aguilar, a native of El Salvador, has three years of eligibility remaining after also transferring from Cal State Northridge.  He also swam for El Salvador’s national team in 2007 and will compete in butterfly events for the Crusaders this year.

Chris Rudolf moves to the pool after playing on the Crusader baseball team in 2010.  He is a former Second Team All-Greater Catholic League swimmer in high school, and will look to help bolster Valpo’s freestyle, breaststroke, and butterfly events.

Five true freshmen also look to make an impact in their first season with the Crusaders.  Alex Cox, a freestyler, was a state qualifier in Illinois while Tate Wegehaupt was an All-American as a senior in the 100 breaststroke for Tigard High School in Oregon.  Alex Harris and Travis Simmons will compete in freestyle events while Ian Jones will swim the fly and individual medley.

The season opens on October 3 as the Crusaders head to Indianapolis, Ind. for a quadrangular meet with Saint Louis, IUPUI, and Evansville.  Valpo will compete in several invitationals this season, including relay meets at Notre Dame and Ball State.  The Purdue Invitational as well as the Calvin Invitational also highlight the slate.

The dual meet season opens October 16 against Milwaukee at the Athletics-Recreation Center pool, where the Brown and Gold will host five meets this year.  Cleveland State, Green Bay, UIC, and IUPUI will also visit Valparaiso this season.

With a quality combination of returnees and newcomers on the roster, Valparaiso will look to move up in the Horizon League.  Individual and relay records will be challenged as an exciting season of Crusader swimming is about to begin.