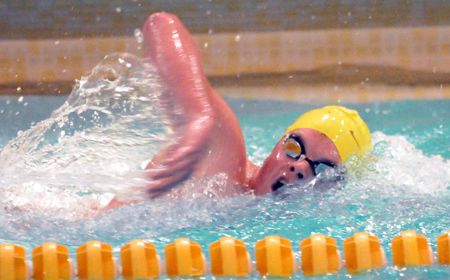 Valparaiso began the 2011 Horizon League Championships on Wednesday evening at the Busbey Natatorium in Cleveland, Ohio.  Through three events the Crusaders are in sixth place with 52 points.

The host Vikings of Cleveland State lead the way after day one with 122 points just ahead of Milwaukee (111) and UIC (106).  Wright State is fourth with 78 points while Green Bay is just ahead of the Crusaders with 68 points.

The only individual event for the men on day one was the 1000 freestyle.  Steve Booth (Saint Joseph, Mich./Saint Joseph H.S.), the lone Crusader entry in the event, posted a career-best time of 10:36.18, bettering his previous best mark in the event by more than five seconds.

Day one ended with the 200 medley relay.  The Crusaders finished sixth in the race with their third fastest time in school history.  The team of Sivak, Trevor Trimpe (New Palestine, Ill./Connersville H.S.), Hunter, and Deghi finished with a time of 1:36.53, just 0.21 seconds shy of the school record.

Valparaiso will return to the water for day two of the four day meet on Thursday.  Preliminary heats begin at 9 a.m. CST with the night’s finals commencing at 4:30 p.m. CST.