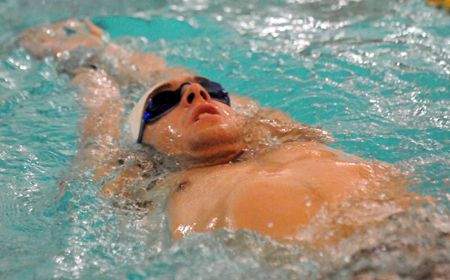 David Sivak (Hobart, Ind./Hobart H.S.) advanced to the finals in a pair of events on Friday, to lead Valparaiso on the third day of the Horizon League Championships, which are taking place at the Busbey Natatorium in Cleveland, Ohio.

Sivak started his day with the second fastest time in school history in the 100 butterfly.  Sivak qualified 14th with a time of 51.44 seconds, then improved his placing in the evening finals with a time of 51.75 seconds, finishing 13th overall.  The senior then added a 12th place finish in the 100 backstroke with his finals time of 52.86 seconds.  Sivak qualified 13th in the event with a morning time of 52.90 seconds.

Trimpe posted the school’s ninth fastest mark ever in the 100 breaststroke during qualifying with a time of 1:00.53, finishing 17th, missing the final spot in the B final by just 0.18 seconds.  Travis Simmons (Angola, Ind./Angola H.S.) added a collegiate best mark of 1:02.12, finishing one spot behind Trimpe.  Ryan Burling (Morris, Ill./Morris Community H.S.) and Toshko Ganzorigt (Ulaanbaatar, Mongolia/Orcholon H.S.) both added person bests in the event as well with times of 1:03.30 and 1:08.79 respectively.

Fedde added a collegiate best time of 54.71 seconds in the 100 fly, but did not qualify for the finals.  Chris Rudolf (Middletown, Ohio/Bishop Fenwick H.S.) bettered his previous time by approximately 2.5 seconds in the event with a time of 55.52 seconds as did Ian Jones (Lexington, Ohio/Lexington H.S.), who posted a time of 57.50 seconds.

Patrick led the way for Valpo in the 200 freestyle with a career best mark of 1:52.49 while Steve Booth (Saint Joseph, Mich./Saint Joseph H.S.) added his personal best by three seconds in an exhibition swim in the  event with his time of 1:54.30.

Valparaiso will wrap up the 2010-2011 season on Saturday on the final day of the league championships.  The preliminary heats begin at 9 a.m. CST with the finals slated to commence at 4:30 p.m. CST.