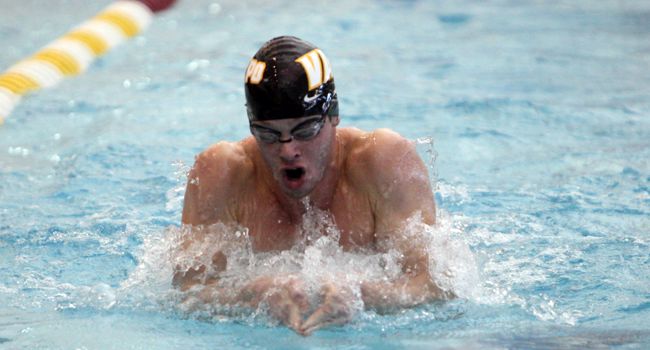 Valparaiso made the most of its Senior Day meet on Saturday afternoon, sending the upperclassmen out in style with a 57-36 victory over Monmouth (Ill.) at the Athletics-Recreation Center for the Crusaders’ first victory of the season in the home finale.

Braun added a pair of individual victories, starting in the 50 freestyle.  He won the event by more than a second-and-a-half with a time of 22.49 seconds before winning the 100 freestyle with a time of 50.48 seconds.

Fedde won the 100 butterfly by 1.45 seconds while Matt King (Clinton, Ill./Clinton H.S.) posted a victory by more than four seconds in the 100 backstroke with a time of 56.95 seconds.

Deghi and Trimpe were honored prior to the meet along with classmates Austin Hunter (La Crescent, Minn./La Crescent H.S.) and Thomas Patrick (Hartland, Wis./Arrowhead H.S.) as members of the senior class of 2012.

Valparaiso (1-9) will wrap up the dual meet portion of the schedule next Saturday, Feb. 4 with a quadrangular meet against Monmouth (Ill.), Western Illinois, and Augustana (Ill.).  The meet begins at 1 p.m.  Please note, this is a change in date as the meet was originally slated for Sunday.