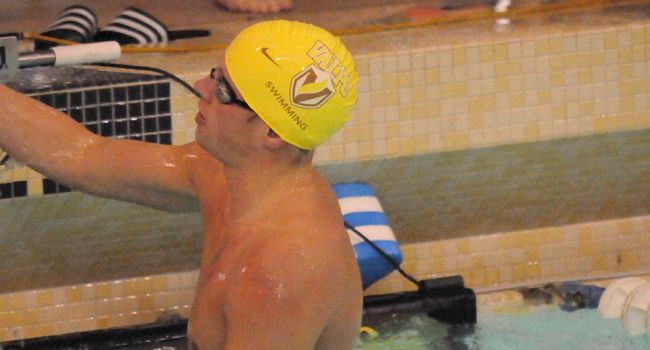 Four individuals returned for the evening finals on Friday as Valparaiso continued to turn in top times at the Horizon League Swimming and Diving Championships held at the Walter Schroeder Aquatic Center in Brown Deer, Wis.

Kyle Braun (McHenry, Ill./West H.S.) led a trio of Crusaders in the final of the 200 freestyle on day three of competition.  The freshman finished 13th overall with a time of 1:48.50 in the finals after posting a collegiate best time of 1:47.36 in the morning preliminary heat.  Fernando Aguilar (San Salvador, El Salvador/Colegio Internacional de San Salvador H.S.) was one place behind Braun with a career best time of 1:48.71.  Thomas Patrick (Hartland, Wis./Arrowhead H.S.) completed the scoring for the Brown and Gold in the event finishing 16th with a personal best time of 1:50.93.

Matt King (Clinton, Ill./Clinton H.S.) added a 16th place effort in the 100 backstroke with a finals time of 54.72 seconds.  He performed even better in the morning session posting the sixth fastest mark ever at Valpo, 54.22 seconds.  Russell Deghi (Sebestopol, Calif./Analy H.S.) added a career best in the event as well finishing in 56.36 seconds.

Trevor Trimpe (New Palestine, Ind./Connersville H.S.) just missed out of the finals in the 100 breaststroke but still had a solid showing.  He touched the wall in 59.67 seconds, fifth fastest in Valparaiso history.  Patrick Sandness (Seneca, Ill./Seneca H.S.) added a personal best in the event with a time of 1:05.11.  Steven Parker (Fairborn, Ohio/Fairborn H.S.) and William Mathe (Wauconda, Ill./Carmel H.S.) added collegiate bests as well with marks of 1:06.85 and 1:07.47 respectively.

The Crusaders finished the night with a sixth place showing in the 800 freestyle relay.  The team of Trimpe, Fedde, Fernando Aguilar, and Patrick posted a time of 7:13.82.  Trimpe’s lead off leg of 1:45.52 marked the sixth best 200 free time in school history.