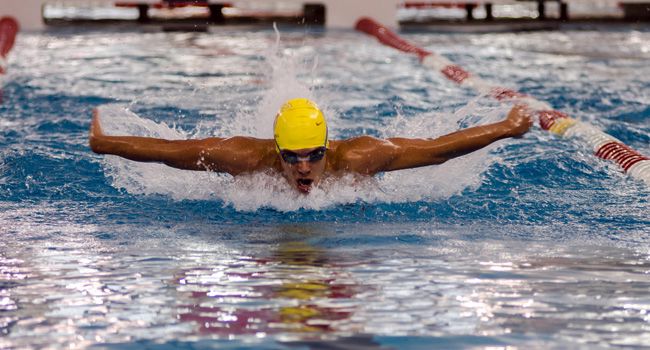 Gonzalo Castro Diaz broke his own school record in the 400 IM Friday.

The Valparaiso men’s and women’s swimming teams closed out day number three at Oakland University for the 2016 Horizon League Championships Friday evening. The day’s events consisted of the men’s and women’s 400 IM, 100 fly, 200 free, 100 breaststroke, 100 back and 400 medley relay.

Senior Gonzalo Castro Diaz (Mexico City, Mexico/Instituto Oxford) stole the show for the Crusaders in the 400 IM. After entering his final collegiate meet already owning the school record in the event, Castro Diaz improved upon that Friday morning in the prelims, slicing over three seconds off the mark with a time of 4:03.98.

Improving the school record in the morning was not enough for Castro Diaz though, as he went and broke that record in the finals Friday evening, finishing with a time of 4:02.42 to place 11th in the event. Joining Castro Diaz in the 400 IM was Dylan Kirar (Arvada, Colo./Ralston Valley), whose prelim time of 4:11.52 was fourth-fastest in Crusader history.

Penn picked up six points for the men’s team in the 100 back, touching the wall in 51.38 for an 11th-place finish, while Lawson swam a prelim time of 53.33 in the same event to move into ninth in program history in the event. Jenny also qualified for the B final in the 100 breaststroke, finishing 14th with a time of 57.17 after swimming it in 56.84 in the prelims.

Mac Sogandares (Reston, Va./South Lakes) joined the ranks of the Valpo record book in the 200 free on Friday with a time of 1:45.41, placing ninth all-time. Tim Mitchell (Lakeville, Minn./North) paced the Crusaders in the 100 fly with a time of 52.29.

A pair of Crusader women moved up the school’s all-time charts in their respective events on Friday. Rachel Law (Wayne, Pa./Villa Maria Academy) swam the 400 IM, pacing Valpo with a time of 4:44.48 - good for fifth all-time. Emily Trimpe (New Palestine, Ind./New Palestine) joined the books in the 200 free as she touched the ball in 1:55.89 – fifth-fastest in team history.

The Valpo men’s team currently sits in seventh place with 115 points, while the women’s team is in eighth place with 68 points entering the final day of competition on Saturday. Fans can follow live scoring and video via links at ValpoAthletics.com.