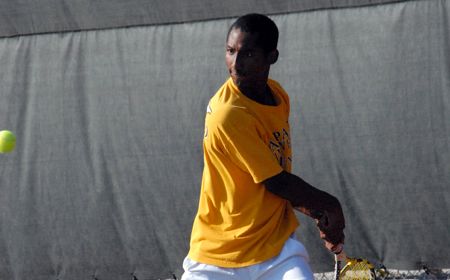 Phidias Fortune teamed with Kyle Stump for a 1-1 record on Saturday. (Ray Acevedo)

Valparaiso wrapped up the fall portion of its 2008-2009 season on Saturday afternoon with day two of play at the Ball State Fall Invitational held in Muncie, Ind.  The Crusaders were competing in just doubles on the day, and had mixed results.

Alex Lau (Bloomington, Minn./Jefferson Senior H.S.) and Kevin DeHerrera (Littleton, Colo./Chatfield H.S.) fell to Chris Herron and Bryce Warren of Butler 8-2 in the quarterfinals of the A flight.

In the C doubles, Kyle Stump (Plymouth, Ind./Plymouth H.S.) and Phidias Fortune (San Antonio, Texas/Madison H.S.) were 8-0 victors over Adam Perkins and Nate Veselenek of Cleveland State in the consolation draw.  The duo then dropped the consolation semifinal match 8-5 against Derek Carpenter and Dave Thomas of Ball State.

Adam Whitmer (Shipshewana, Ind./Westview H.S.) teamed with Dean Masuda of Detroit in the D flight.  In the quarterfinals the tandem fell 8-5 to a team combined of Butler and Indiana State.  They then won 8-4 against Eastern Illinois and Wright State.

“There have been a lot of bright spots for this team to do well, but today also exposed how much we need to work on our doubles play,” head coach Jim Daugherty said.  “Overall we played okay this fall and the freshmen got a good taste of collegiate tennis.”

The Crusaders will host their annual alumni tournament next Saturday beginning at 2 p.m. at the Valpo Tennis Complex.