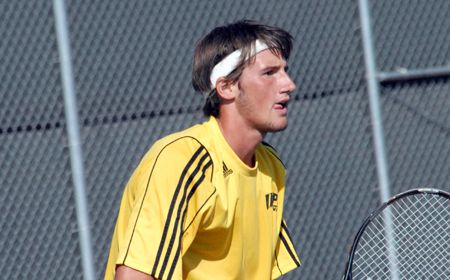 Kyle Stump won in both singles and doubles for the Crusaders at Bradley. (Ray Acevedo)
Related Links

Valparaiso fought at every position in the lineup on Saturday afternoon, but could not pull out quite enough games, dropping a 5-2 decision to Bradley at the Clubs of River City in Peoria, Ill.

“This was both a encouraging and frustrating match for us at the same time,” head coach Jim Daugherty said.  “The encouraging part is that they are a really solid team and if we play just a little better we could have beaten them.  On the other hand, it is frustrating because the match was within reach.  We were within reach of winning the doubles point and the singles matches went right down to the end.”

Bradley (3-1) won the opening doubles point, but not without the Crusaders putting up a fight.  Phidias Fortune (San Antonio, Texas/Madison H.S.) and Kyle Stump (Plymouth, Ind./Plymouth H.S.) won at the third spot in a tie-break, 8-7 (4) over Michel Macara-chvili and Evgeny Samoylov.  Valpo was unable to pull off another victory though to earn the first point of the day.  Kevin DeHerrera (Littleton, Colo./Chatfield H.S.) and Adam Whitmer (Shipshewana, Ind./Westview H.S.) dropped a narrow 9-7 decision to Mitch Osborne and Richard Robertson.

Stump tied the match at one right off of the bat, cruising to his second win of the day, 6-1, 6-0 against Osborne at sixth singles.  Bradley made it 3-1 as Samolyov defeated Fortune 6-0, 6-1 at the third spot in the order and Robertson posted a 6-4, 6-3 win over Whitmer at number five singles.

The other three singles matches saw the opening sets go to tie breaks, which in two of them unfortunately did not fall the way of the Crusaders.  Litscher won his tie-break on the way to a second singles win over Fraychineaud 7-6 (5), 6-3 for the Brown and Gold.

Lau dropped a tough 7-6 (5), 6-0 match at the top of the lineup against Romic and DeHerrera fell 7-6 (7), 6-3 at the fourth spot against Macara-chvili to give Bradley the other two singles points.

“A match like this makes us want to work harder, but at the same time we were able to take away a great deal of confidence,” concluded Daugherty.

Valparaiso (0-2) will open the home portion of its schedule next Saturday afternoon as the Crusaders host IUPUI at the Courts of Northwest Indiana.  First serve is set for 1 p.m.