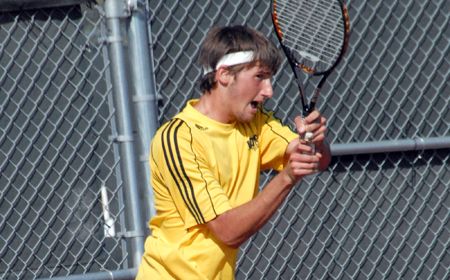 Valparaiso won the final three singles matches on Saturday afternoon to rally from a 3-1 deficit and defeat IUPUI in the Crusaders’ home opener at the Courts of Northwest Indiana.

“The team showed a lot of character after losing the doubles point to comeback,” head coach Jim Daugherty said.  “We fought to the end in every match.  I was really proud of the bottom of the  line-up stepping up in singles to get the job done.”

The Crusaders dropped the opening doubles point which was closely contested.  IUPUI (0-7) won the first match at number two doubles as Gregory Sosa and Taylor Tunis defeated Kyle Stump (Plymouth, Ind./Plymouth H.S.) and Carlton Lyons (South Bend, Ind./Clay H.S.) 8-2.  Lyons was making his collegiate debut on Saturday afternoon.  The Crusaders tied up doubles as the number one team of Alex Lau (Bloomington, Minn./Jefferson Senior H.S.) and Tom Litscher (Eau Claire, Wis./Memorial H.S.) broke serve late in the match on the way to an 8-5 victory over Daniel Klingenberg and Bren Vasalakis.  With the point tied at one, the Crusaders were up a break at third doubles, but IUPUI’s team of E.J. Dechow and Jorge Yunes rallied to post an 8-6 win over Kevin DeHerrera (Littleton, Colo./Chatfield H.S.) and Adam Whitmer (Shipshewana, Ind./Westview H.S.)

Valpo tied the match at one early in singles as DeHerrera posted a straight sets 6-3, 6-0 victory over Dechow at the number three spot.  IUPUI won a pair of three set matches at the top two spots to take a 3-1 lead though.  Klingenberg defeated Litscher 7-5, 3-6, 7-5 at the second spot and Sosa followed, rallying from a set down to top Lau 4-6, 7-5, 6-4.

Phidias Fortune (San Antonio, Texas/Madison H.S.) started the Crusader comeback with a straight sets win at fourth singles 6-4, 6-3 over Vasalakis.  Whitmer, a freshman, won a pair of tie-breaks against Yunes at the sixth spot, to win 7-6 (6), 7-6 (1) and tie the contest at three.

In the decisive fifth singles match, Stump rallied from a set down to pull out the win.  He dropped the opening set 7-5 against Tunis before posting a 6-2, 6-3 win in the final two sets.

Valparaiso (1-2) will head to Muncie, Ind. next Saturday evening to face Ball State.  First serve is set for 5 p.m. CST.