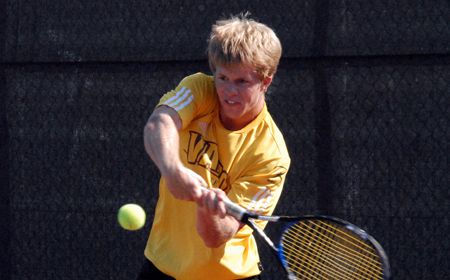 Whitmer posted a 6-3, 6-4 victory over Pip Rehg at sixth singles for the Brown and Gold.  The Raiders won the top five singles matches, including three in straight sets.  Alex Lau (Bloomington, Minn./Jefferson Senior H.S.) and Tom Litscher (Eau Claire, Wis./Memorial H.S.) each rallied from a set down to force tie-breaks for the third set, but neither was able to come away victorious.  Lau fell 6-4, 1-6, 10-5 against Brian Dredge at the top of the lineup while Litscher suffered a 6-4, 4-6, 10-7 setback against Landon Neuman at number two singles.

Whitmer also earned a doubles win on the afternoon for the Crusaders, teaming with DeHerrera to post an 8-7 (6) victory over Rehg and Wowchuk at third doubles.  However, Wright State won at both one and two doubles by identical 8-3 scores.  Alafriz and Kruusmagi downed Lau and Litscher at the top spot while Neuman and Dredge topped Stump and Fortune.

“This was a disappointing match for us,” head coach Jim Daugherty said.  “I was hoping for us to peak with our first conference match, but our better tennis is still in front of us.”

Valparaiso (3-7, 0-1) will return to the courts on Tuesday afternoon, hosting Dayton at the Valpo Tennis Complex.  First serve is set for 3 p.m.