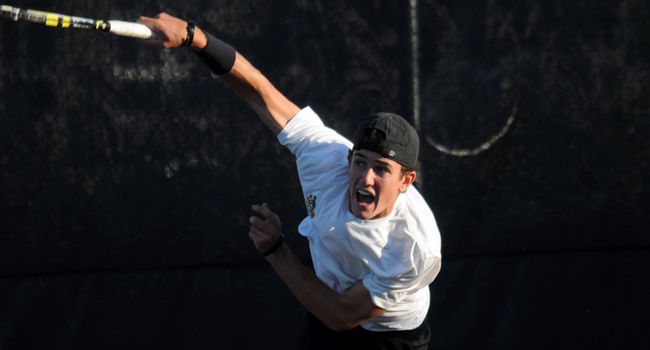 The final coat of paint had yet to dry at the Courts of NWI before Eric Honert and the Valparaiso Crusaders made a splash of their own.

Located just across from the newly constructed Porter County Hospital on Highway 49, the indoor facility is home to the Crusaders until the weather allows the team to break out of its hibernation.  The large inflatable bubble opened its doors just late last week.

And Valpo threw quite the housewarming party.

The turning point of the day was the decisive match for the one doubles point.  Eric Honert (Arvada, Colo./Ralston Valley H.S.) and Lucas Waak (Manitowoc, Wis./Roncalli H.S.) found themselves in a 7-3 hole.  With Ben Yue and Patrick Hammers needing just one game to take the doubles point, the Valpo duo rallied to take the next four games sending it to a tiebreaker.  With considerable momentum on their side, the pair took the tiebreaker 7-2.

The highly athletic and promising Holt evened the match at 2-2 with his 6-3, 6-4 triumph over Savaglio at No. 3 singles.

Down 3-2, the Crusaders put their hopes on the shoulders of Baiocchi and Honert.

Baiocchi and Hammers engaged in a fiery match at No. 2.  Going back and forth for much the match, Baiocchi prevailed over the senior 6-4, 1-6, 6-3.

All eyes then turned towards the winner-take-all No. 1 match between Honert and Haertel.

Honert won the war of attrition taking the third set 6-0 and giving the Crusaders a 4-3 match victory.

Valpo is now 1-0 on the young season.  Meanwhile, the Leathernecks moved to 1-2.

Valpo resumes play Saturday versus Grace College and Chicago State at the Courts of NWI.  The matches are slated for 10:00 am and 3:00 pm respectively.