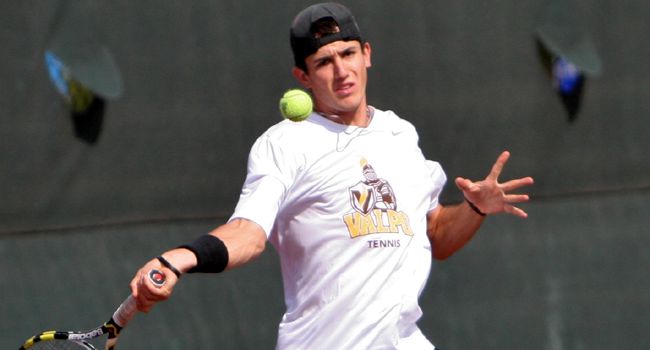 Head coach Jim Daugherty can't believe this is his 28th year at the helm of the Valpo's men's tennis program.

"Sometimes I gotta check..." Daugherty said, putting a hand over his heart while exuding a heavy chuckle.

Valparaiso's longest-tenured coach has been all smiles since his 2013-2014 squad arrived on campus a few weeks ago - and deservedly so. Daugherty welcomes four freshmen who comprised the 36th-ranked recruiting class in the nation according to Tennis Recruiting Network.

Furthermore, senior Eric Honert (Arvade, Colo./Ralston Valley) enters this year's season with 55 career singles victories, two behind Nate Buckert's record 57. Buckert's record is a sitting duck, as the question remains not if, but when Honert will surpass the 2002 graduate to become Valpo's all-time winningest singles player.

On a roster of ten players, only Honert and sophomore Lucas Waak (Manitowoc, Wis./Roncalli) - who turned 20 today - can look in the rear-view mirror and see their teenage years. Honert's role as a leader is by no means new.

"He's very interested in taking ownership of the team and he holds teammates accountable on and off the court," Daugherty said last year.

That duty begins again this Friday as the Brown and Gold open the fall half of their schedule at the River Forest Invitational in River Forest, Illinois. A deep draw of opponents will give the newly-christened Crusaders a strong test out of the gate. Northern Illinois, Saint Louis University, Youngstown State, UIC, Butler, Morehead State, Butler and Belmont will all be in the mix.

The draws for the singles matches are flighted #1-#6. The River Forest Invitational is not a team tournament per se; the structure is random so while Valpo's No. 3 singles player may face Youngstown State's No. 3, Valpo's No. 2 may play Belmont's No. 2.

While the Horizon League stretch in the spring represents the circled dates on the calendar, the fall season provides the coaching staff with valuable evaluation and supplemental instructional opportunities.

"The fall is more of a developmental stage. We're developing the will to win. Our focus is getting guys playing time and then going back to the drawing board," Daugherty proclaimed.

The team has already conducted its challenge matches to determine seeding for the upcoming event. Sophomore Michael Baiocchi (Naperville, Ill./Neuqua Valley) earned the No. 1 spot while freshman Jeffrey Schorsch (Perrysburg, Ohio/Perrysburg) scratched his way to No. 2. The fact that Honert, the eventual all-time winningest singles player in school history, is slotted at No. 3 represents an endorsement of the quality of depth the Crusaders possess. Sophomore Michael Savaglio (Kenosha, Wis./Mary D. Bradford) will compete at No. 4. Dave Bacalla (Skokie, Ill./Niles North) will play at No. 5, with fellow freshman Kyle Dunn (Fon du Lac, Wis./Fon du Lac) rounding out the top six.

On the doubles side, Bacalla will team up with freshman Charlie Emhardt (Carmel, Ind./Carmel) at No. 1 doubles. Honert and Schorsch will play at No. 2, with sophomore Danny Oakes (Elburn, Ill./Saint Charles North) and Waak battling at No. 3.

"The rankings this first week are an initial indicator, but certainly are not the ultimate indicator," Daugherty said.

Played on clay, The River Forest Invitational is the first of four fall meets that will give Daugherty and assistant coach Michael Woodson the venue to tinker with different lineups and doubles combinations. The Crusaders will participate in the Purdue Invitational the following weekend before hosting the Valparaiso Fall Invitational on the final weekend of September.

Daugherty discussed the importance of each event as the clay courts at River Forest may not provide the most accurate barometer for evaluation.

"It's a different game. It's definitely much slower, so for some guys it'll play to their strengths," Daugherty mentioned.

It's been 290 days since Daugherty received National Letters of Intent from Bacalla, Dunn, and Schorsch. Emhardt later committed in the spring. He couldn't help but grin when posed with the idea that Friday will be the first time he'll get to see one of his most talented classes in 28 years finally take the court as players and not recruits.

At last, the future is here. And it's giving Jim Daugherty plenty of reasons to smile.