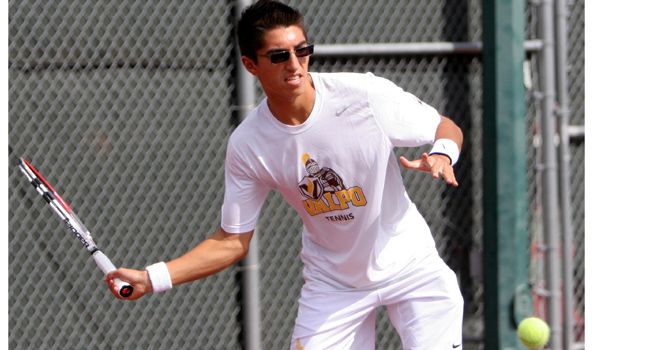 After dropping the first set 6-0, Michael Savaglio rallied from 3-0 down in both the second and third sets to take his first round match over Detroit's Bobby Cawood 0-6, 7-5, 6-4.

Valpo's freshmen continue to take the Midwest by storm as Jeffrey Schorsch (Perrysburg, Ohio/Perrysburg) and Dave Bacalla (Skokie, Ill./Niles North) advanced to the Round of 16 at the ITA Midwest Regionals in Columbus, Ohio on Thursday.

"We came out with a lot of energy today and played confidently. Dave and Jeffrey played strong from start to finish which is something we've been working on with them," head coach Jim Daugherty said.

Schorsch, the 6th seed in the singles qualifying bracket, defeated Illinois State's Rolando Torrellas 6-2, 6-2 in their morning match. The freshman then took care of UIC's Alexander Raa 6-1, 6-4 in the second round to move onto Friday's Round of 16. With the pair of wins, Schorsch is now 7-3 on the season. Schorsch will meet Toledo's Kittibodee "Mark" Singnil Friday morning at 8 am.

Not to be outdone, the 10th-seeded Bacalla was also victorious in straight sets in both of his matches Thursday. Bacalla eliminated UIC's Alan Reifer 6-1, 6-3 in the morning match. The win set up a second round tilt with Michigan State's Doug Zade. Zade was coming off a 7-6 (7), 6-2 win over Crusader senior Eric Honert (Arvada, Colo./Ralston Valley) in the first-round. Bacalla wasn't about it to make it two in a row over Valpo as he showed Zade the door, handing him a 6-1, 6-4 defeat. Bacalla will face Western Michigan's Michael Treis Friday morning at 8 am.

Sophomore Michael Savaglio (Kenosha, Wis./Mary D. Bradford) pulled off one of the best comebacks in recent Valpo tennis history in his first-round match. Savaglio was shutout in his first set versus Detroit's Bobby Cawood before falling behind 3-0 in the second set. He managed to rally back and take the second set 7-5. Savaglio again let Cawood jump out to a 3-0 lead in the decisive third set before mounting another comeback and claiming the final set 6-4.

"Michael's comeback was incredible. It was great to see such fight and to see him never give up with his back against the wall," Daugherty said.

The win propelled Savaglio into a second-round match with the #2 seeded Frederic Cadieux of Northern Illinois University. Unfortunately, Savaglio's bag of tricks was empty as he lost 6-1, 6-1.

Freshman Charlie Emhardt (Carmel, Ind./Carmel), who appeared as an alternate, was on the wrong end of a 6-4, 6-1 match with IPFW's Gerard Guell.