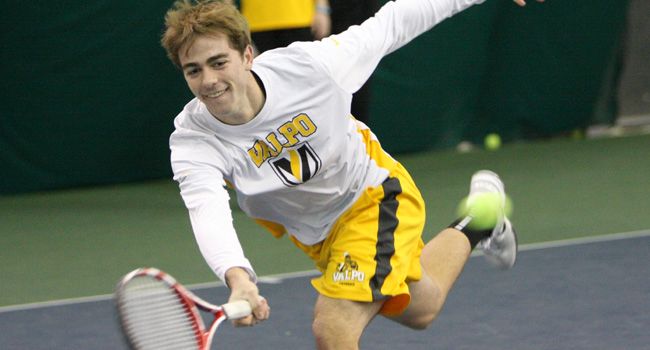 Sophomore Brian Hickey did not lose a game in either singles or doubles play Tuesday in Valpo's 7-0 win over Monmouth College. (Suzy Waak)
Related Links

Valparaiso cleaned up in singles play as no Crusader lost more than four games in any of their six straight set victories.

Valpo clinched the match at No. 2 after Honert's 6-0, 6-0 dismissal of Rineberg.

In his first match at No. 1 singles this season, Savaglio made quick work of David Johnson, 6-3, 6-1. Savaglio's 14 singles wins ties him with Dunn for third most on the team.

Freshman Jeffrey Schorsch (Perrysburg, Ohio/Perrysburg) got the day off, but the lefty will go for history tomorrow versus Creighton. Schorsch's 20 singles wins are tied for the most ever by a Crusader in a single season. Valpo (11-3) will square off against the Bluejays (5-2) at 11:30 am ET/10:30 am CT in Orlando.