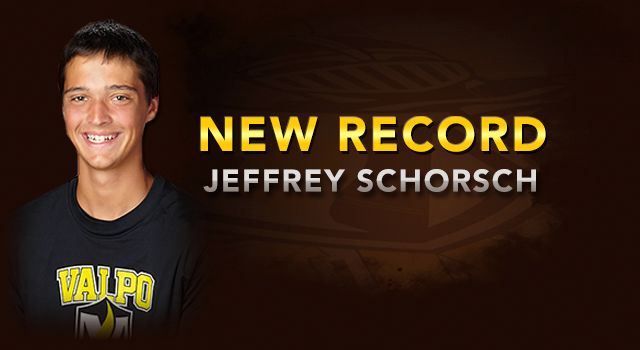 "Jeffrey continues to improve and apply himself every day without any signs of slippage. We are all enjoying his journey as his game continues to break new barriers. If you have not seen him play, you need to get out and see history in the making," head coach Jim Daugherty said proudly.

Valparaiso was victorious 7-0 over Quinnipiac in its final match of the spring trip. The Crusaders steamrolled opponents the entire week, dropping only two points (both to Niagara). The 7-0 result was the fifth straight shutout by the Brown and Gold.

Not to be overlooked is the fact fellow freshman Dave Bacalla (Skokie, Ill./Niles North) won his 18th match of the season, tying him with Alex Lau for No. 5 on the single season victories list.

At No. 2, Bacalla dropped the first set 6-4 before rallying back to take the second and third sets decisively, 6-1, 6-1. The freshman's singles record now sits at 18-5.

"I'm so proud of Dave for keeping his composure and breaking down his opponent. It was great to see," Daugherty stated.

Fellow freshman Charlie Emhardt (Carmel, Ind./Carmel) clinched the match at No. 5 via a 6-1, 6-3 win over Ryoma Haraguchi.

Valpo opened the match by securing the doubles point with wins at No. 1 and No. 2.

Schorsch and Emhardt handed Sell/Fernandez an 8-3 loss at No. 2 before Bacalla and Daniel Oakes (Elburn, Ill./Saint Charles North) clinched the point with an 8-6 triumph at No. 1 over Eric Ambrosio/Luke Roser.

The Crusaders (13-3) will have nine days off to prepare for the beginning of Horizon League play. They'll welcome UIC to The Courts of NWI on Saturday, March 22nd at 2 pm.