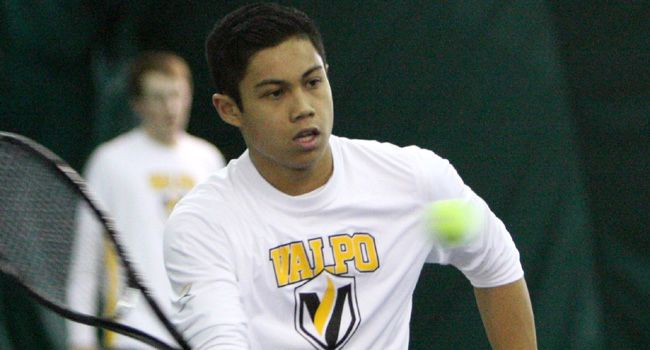 The Crusader men's tennis team secured their first win ever in the main draw of the Horizon League Conference Tournament with an exciting 4-3 win over the fifth-seeded UIC Flames at the University of Michigan Varsity Tennis Center in Ann Arbor on Friday night.

"The fight our guys had tonight was unreal. UIC played great and we were able to tough it out when we needed it most," head coach Jim Daugherty said.

Schorsch won his match at No. 1 singles to give Valpo a 2-0 lead after Raa had to retire in the second set. Schorsch had won the first set 6-1.

Emhardt responded with a 6-4, 6-3 triumph over Carl Hedstrom at No. 5 to give the Brown and Gold a commanding 3-1 lead.

The match hung in the balance at No. 2 as the winner of Dave Bacalla (Skokie, Ill./Niles North) and Reifer would decide which team would advance. Bacalla took the first set 6-3 before Reifer fought back to take the second 7-6. Bacalla lifted the Crusaders into the semis, claiming the third and decisive set 6-4.