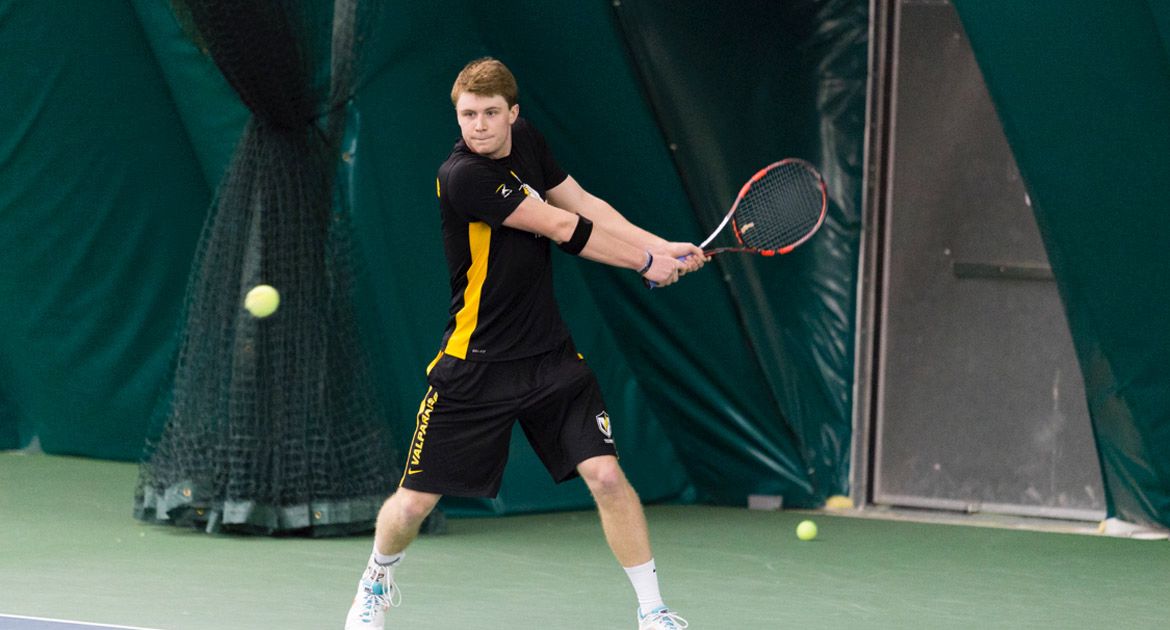 A day after dispatching IPFW with a smooth 6-1 result, the Valparaiso men's tennis team battled its way to a 5-2 victory over IUPUI Saturday afternoon at the Courts of NWI.

"This is the type of match we expect every time we play a conference match. IUPUI provided the level of challenge we needed and it feels great to come away with a win. Our doubles is getting better every match and is really starting to set us up well for singles," head coach Jim Daugherty said.

Valpo's least stressful point of the day came in doubles. Dave Bacalla (Skokie, Ill./Niles North) and Chase Hamilton (Hinsdale, Ill./Central) rolled to a 6-2 win at No. 2 versus the Jaguars' tandem of Adam Reinhart and Akshay Verma.

Charlie Emhardt (Carmel, Ind./Carmel) and Jeffrey Schorsch (Perrysburg, Ohio/Perrysburg) mirrored their teammates' 6-2 score with a triumph over Patrick O'Neill/Alex Toliver at No. 1.

Freshman Garrett Gardner (Poland, Ohio/Poland) regained the lead for the Crusaders at No. 4 with a 6-4, 6-4 victory over Akshay Verma.

Schorsch and Toliver dueled three sets before the Valpo sophomore recorded the win, 6-1, 4-6, 6-2.

Junior Lucas Waak (Manitowoc, Wis./Roncalli) delivered the match-clinching point at No. 5 after a strenuous 7-6 (8-6), 6-4 contest versus David Beasley.

Bacalla put the cherry on top of the Brown and Gold's win with his second triumph in as many days. The sophomore dropped the first set 6-0, but rebounded to capture the final two sets 7-6 (7-3), 6-4.

Valpo (3-0) will face its toughest test to date next time out. The Crusaders will face #8 Illinois (4-1) in a neutral-site affair at Notre Dame. The Fighting Illini are coming off a 4-3 win over the 6th-ranked North Carolina Tar Heels. The match is scheduled for Monday, February 2nd at 10:00 am CT.