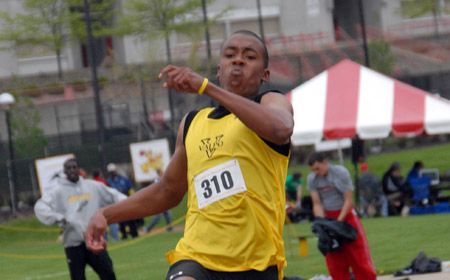 Junior Jarrett Mickens (Aurora, Ill./Waubonsie Valley) won the triple jump Saturday, one of his two top-fives on the day as the Valparaiso men’s track and field team took part in the Boilermaker Invitational in West Lafayette, Ind.

Mickens bested the field in the triple jump with a leap of 45’4 ½”, leading a Crusader 1-2 finish in the event as junior Steve Schubert (Lisle, Ill./Benet Academy) posted a runner-up finish with a jump of 44’9 ¾”.  Mickens also placed fifth in the long jump, recording a mark of 21’11 ½”, while he was joined in the top-ten in that event by freshman Chris Hovan (Elkhart, Ind./Elkhart Christian), who finished tenth with a career-best jump of 19’6”.

A number of Crusaders also posted top-ten finishes on the track Saturday.  Freshman Eric Slenk (Holland, Mich./Christian) registered two top-fives, placing fourth in the 200m dash with a time of 22.91 seconds and fifth in the 400m dash, crossing the line in 50.99 seconds.  Slenk’s time in the 200m dash was the fourth-fastest in Valpo history in the event.

A trio of Valpo runners picked up top-tens in the 800m run.  Derek Schnake (Chicago, Ill./Lincoln Park) and David Carter (Arlington Heights, Ill./John Hersey) each ran season-best times in the event, placing fifth and seventh after completing the race in 2:00.30 and 2:01.80, respectively, while Keith Button (Farmington Hills, Mich./Farmington) finished ninth with a time of 2:07.72.  The Crusader squad of Slenk, Carter, Bryan Gill (Columbia City, Ind./Columbia City) and Button placed fourth in the 4x400m relay, completing the race in 3:38.29.

Valparaiso has been tuning up all season for the 2010 Horizon League Indoor Track and Field Championships, to be contested next Saturday and Sunday, February 27 and 28 in Ann Arbor, Mich.  The two-day meet begins on the 27th at 8 a.m. CST.