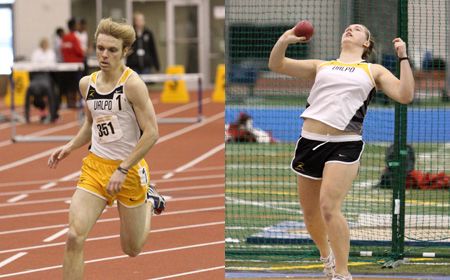 Bradford earned his first career weekly honor from the league office after winning the 1,500m run this past weekend.  The sophomore crossed the line in 4:18.09, earning the event victory by just over one-half second.  Bradford also competed in the 800m run, coming home in fifth place with a time of 2:01.01.

On the infield, Drozdowski earned her second weekly award from the Horizon League in her first outdoor meet as a Crusader.  The freshman moved into Valpo’s all-time outdoor top-fives in both the shot put and the hammer throw on Saturday.  She posted a mark of 39’8 ½” in the shot put, third-best in Crusader history and good for a runner-up finish, and registered a toss of 144’9” in the hammer throw, fourth-best all-time at Valpo and good for fourth place.  Drozdowski also placed tenth in the discus throw with a mark of 117’8”.