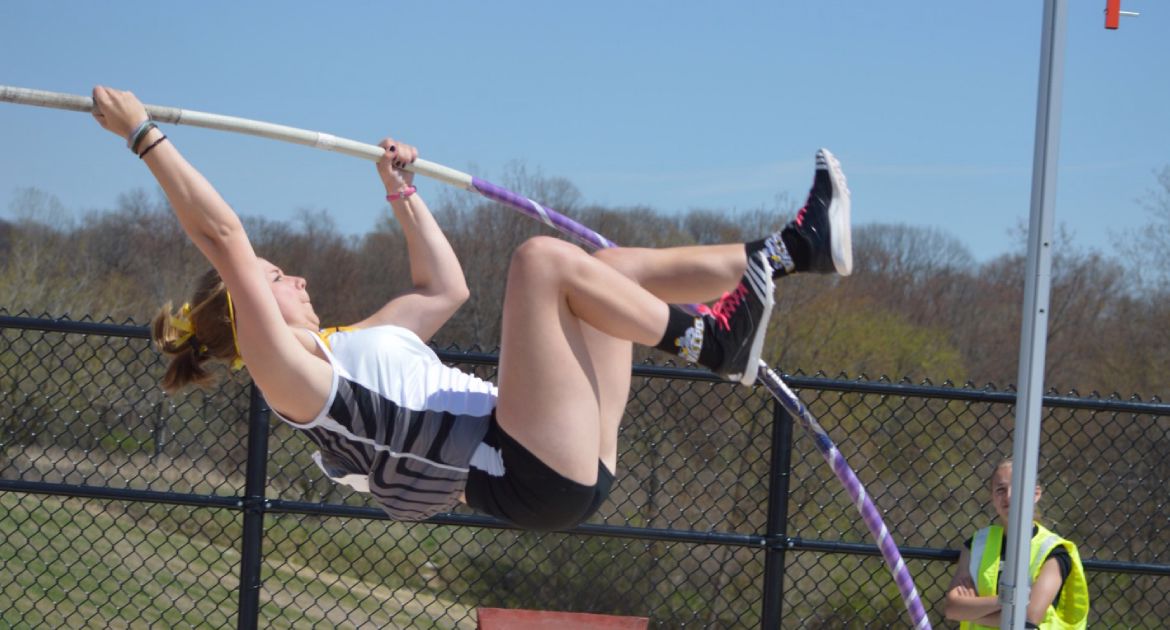 Sarah Peters improved her own program record in the pole vault.

The Valparaiso University men’s and women’s track and field teams traveled to Chicago, Ill. on Saturday to compete at the Windy City Rumble, hosted by the University of Chicago. The Crusader men took home first place, while the women earned a third-place finish. A handful of Crusaders also competed at the two-day Meyo Invitational at Notre Dame, Ind. as well.

A pair of school records fell among the numerous standout performances this weekend, one apiece for the men and women. Friday saw the Crusader men’s distance medley relay team – comprised of junior Adam Bruno, freshman Nathan Dotts, sophomore Benjamin Zibricky and freshman Alexander Bruno – cross the line in 10:15.90 at the Meyo Invitational, over two seconds faster than the 15-year-old previous record. Then on Saturday in Chicago, senior Sarah Peters improved upon her own school record in the pole vault, finishing in first place as she cleared 12’0 ½” – adding two and a half inches to her previous record.

Peters was one of three Crusaders to earn a first-place finish on the women’s side in Chicago on Saturday, as the Valpo women finished in a tie for third out of 10 teams with 73 points. Freshman Abby Jankowski moved into fourth all-time in the Crusader record book with her winning effort of 41’10 ½” in the shot put. Meanwhile, junior Elizabeth Bloy also earned a victory in the 800m run with a time of 2:16.95.

A pair of Crusaders earned top-three finishes in the 3,000m run, as senior Hannah Schilling crossed the line second in 10:47.10 and sophomore Kim Heiny was just over two seconds behind her in third place. On the infield, freshman Chidimma Ozodi leapt 16’10 ½” in the long jump, good for a third-place finish and the fourth-best mark in Valpo history. Senior Ann Chapman placed fourth in the triple jump with a leap of 34’0 ¼”, while freshman Nellie Bonham joined Jankowski with a top-five finish in the shot put.

The men’s team scored a total of 165 points to win the Windy City Rumble on Saturday, beating out host University of Chicago by seven points. Six event victories led the way for the Crusaders in the meet win, highlighted by the effort of senior Jacob Smutz in the weight throw. Smutz improved upon his second-best effort in program history with a toss of 67’2 ¾”, leading a sweep of the top three positions for the Crusaders. Sophomore Andrew Guzek placed second with a distance of 61’5”, moving into third in Valpo history, while senior Christopher Sosnowski also PRed in finishing third.

Guzek brought home a first-place finish in the shot put as well, posting a top mark of 48’11 ½”. Sophomore Alexander Watson and freshman Zachary Topper both cleared 14’11” in the pole vault to finish first and second, respectively, with Topper moving into a tie for third place in Crusader history as Valpo earned four of the top-five spots in the event. Sophomore Jonathan Heagy posted a height of 6’3 ¼” to win the high jump, leading five Crusaders in the top-six, while Valpo claimed four of the top five spots in the long jump as well, led by a second-place showing from freshman Malik Riley, leaping 20’9 ¼”.

On the track, Zibricky took first in the 800m run, finishing with a time of 1:58.29, leading the way as Valpo boasted six of the top-10 finishers. Adam Bruno also earned a win on Saturday after contributing to Friday’s record-setting effort, breaking the tape in the 3,000m run as he finished in 8:56.25.

A few athletes also competed at the Meyo Invitational on Friday, highlighted by the record-setting effort by the DMR squad. Smutz earned an eighth-place finish among a tough field in the weight throw, improving his PR by nearly a foot and a half as he posted a toss of 66’0 ½” before adding another foot-plus to his PR on Saturday. Junior Dan Walters also cracked Valpo’s record book, moving into fourth place in Crusader history in the 600m dash with a time of 1:24.26.

Valparaiso will be back in action next weekend. Select athletes may head to the Tyson Invitational, hosted by Arkansas, while most of the squad will compete at the GVSU Big Meet.