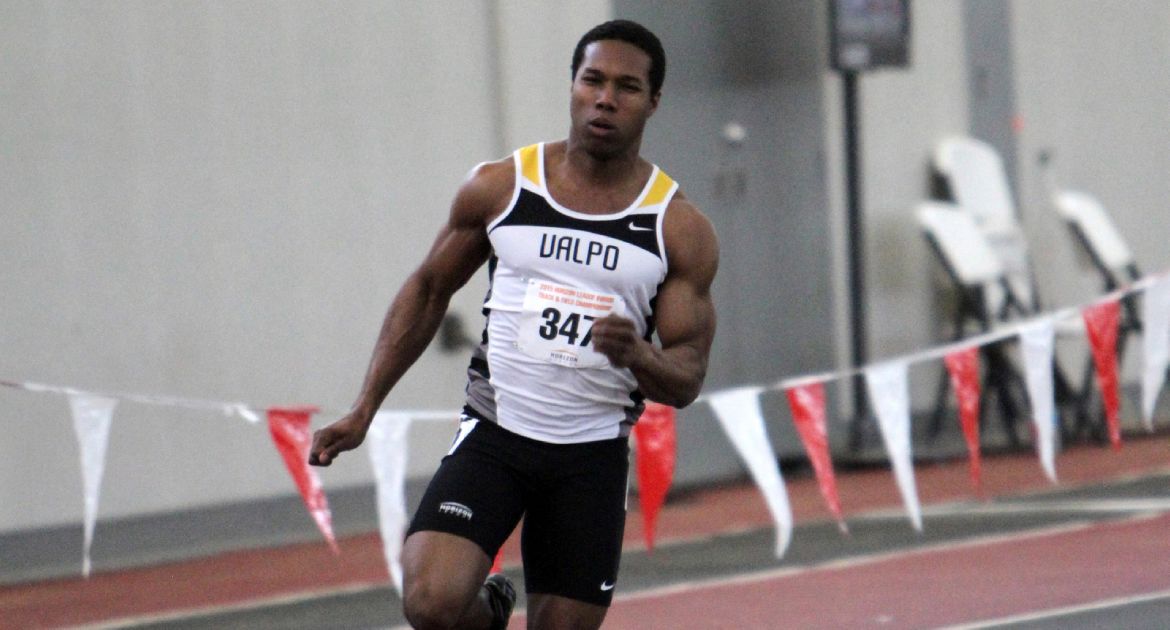 James Sampson finished 4th in the 100m dash and was a member of the winning 4x100m relay squad.

The Valparaiso University men’s and women’s track and field teams started the 2016 outdoor season this weekend at the Billiken Kickoff in St Louis, Mo.

The Crusader men finished the competition in third place overall out of the seven competing teams, scoring a total of 126.5 points. Milwaukee took top honors with a total of 210 points. On the women’s side, Valpo finished in fourth place with 66 points, while host Saint Louis won with 197 points.

On the men’s side, Jeru Lollis ran a 10.76 100-meter dash, earning first place to score ten points for the Crusaders and move into fifth in Valpo history, while James Sampson placed fourth in the same event with a time of 10.96 seconds.

The Crusader 4x100m relay team of Anthony Franze, Lollis, Nathan Dotts and Sampson also cracked the Crusader record books, moving into fourth in program history and producing a first-place finish with a time of 42.39 seconds. Elsewhere on the track, Alex Ruscitti and Cameron Beisel finished third and fourth, respectively, in the 110m hurdles with times of 16.35 and 17.27 seconds.

Valpo claimed three of the top four finishers on the infield in both the hammer throw, led by the meet-record toss of 188’3” from Jacob Smutz, and the javelin throw, which was won by Elijah Owen with an effort of 173’8”. Smutz also took second in the discus throw with a mark of 154’8”, while Valpo posted three third-place finishes in the throws – Andrew Guzek in the shot put with a toss of 46’4 ¾”, Chris Sosnowski in the hammer throw with a mark of 173’10” and Andrew McKissick in the javelin throw with an effort of 167’5”.

Heather Mende earned the event win in the javelin throw with a distance of 121’8”, ranking fifth in Crusader history. Sarah Peters picked up eight points with her second-place finish in the pole vault, with a height of 11’3”, while Abby Jankowski brought home six points in the discus throw with a third-place finish after a toss of 127’0”.