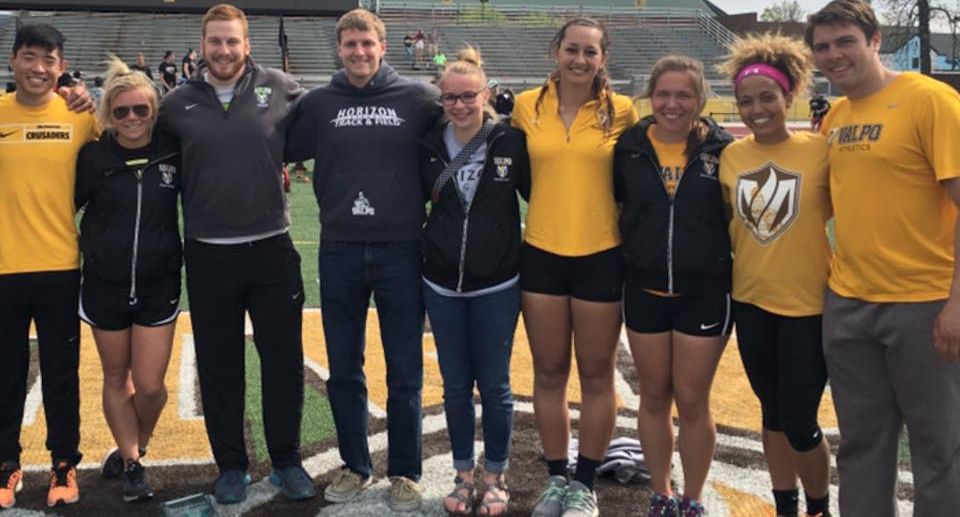 The Crusader seniors on the final day of the Horizon League Outdoor Championships.
Related Links

The third and final day of the 2016 Horizon League Outdoor Track and Field Championships took place at Valparaiso University on Sunday afternoon. Junior Liz Bloy claimed the league championship in the 1,500m run, while freshman Connor Hickey was honored as the Men’s Freshman Field Athlete of the Meet as the Crusader men matched their best-ever finish in the Horizon League.

The Youngstown State Penguins were crowned champions on both the men’s and women’s side of the meet. The Crusader men finished in fourth place to match their best finish outdoors since joining the league, and tallied a total of 102.5 points – their highest point output as a Horizon League program. Valpo’s women finished in eighth place with 33 points.

Bloy led the way for the Valpo women on Sunday with her win in the 1,500m run, covering the nearly four-lap event in 4:45.37, edging out Wright State’s Jessica Doepker by less than a second. It was Bloy’s second Horizon League title of the year, as she previously garnered top honors indoors in the one mile run.

Meanwhile, Hickey was tabbed the league’s Freshman Field Athlete of the Meet after a standout performance in his first outdoor championship event. Hickey won the decathlon, rallying from down 262 points entering the final event as he bested the field in the 1,500m run by 34 seconds. The freshman also took ninth place in the javelin throw as well.

Sunday’s events included finals in the running events, hammer throw, and triple jump. Senior Chris Sosnowski led the way for the Crusader men in the hammer throw, reaching a distance of 178’ 11 1/2” to earn fourth place overall. Montell Hall earned himself a podium finish in the triple jump with a PR of 44’ 0 1/2”, while teammates Malik Riley and Collin McCullough finished ninth and tenth, respectively, with jumps of 42’ 5 1/4” and 40’4 3/4”.

On the track, sophomore Ben Zibricky earned a second-place finish in the 800m run to pick up All-League accolades, finishing in a time of 2:00.31 to score eight points for the Crusaders. Freshman Alexander Bruno, who was the fastest in Saturday’s prelims in the event, placed fifth in the finals with a time of 2:00.53, and also paced Valpo in the 1,500m run as he crossed the line in 4:11.89.

Sophomore Brandon Riley earned three points with his sixth-place finish in the 400m dash, finishing in a season-best time of 49.03. In the 100m dash, junior Jeru Lollis finished seventh in the finals with a time of 10.89.

Junior Adam Bruno led five Valpo runners in the 5,000m run, placing ninth overall with a time of 15:21.91. Meanwhile, both Crusader relays posted the program’s fastest times since collegiate track switched from measuring in yards to meters, as the 4x100m relay squad placed fourth with a time of 41.84 and the 4x400m relay team finished fifth in 3:21.08 in the meet’s final event.

On the women’s side, freshman Chidimma Ozodi led Valpo in the triple jump with a PR of 34’ 2 1/4”. Freshman Nellie Bonham finished in 10th place in the hammer throw, also setting a PR with a mark of 127’ 9”, while fellow rookie Abby Jankowski finished one spot back with a toss of 116’ 3”.

Sophomore Hannah Reynard placed eighth in the finals of the 400m hurdles, crossing the line in 1:05.66, while sophomore Kim Heiny paced the Crusaders in the 5,000m run with a time of 18:43.89. Valpo’s 4x400m relay squad posted the third-fastest time in program history, crossing the line in 4:02.16 to finish in seventh place.