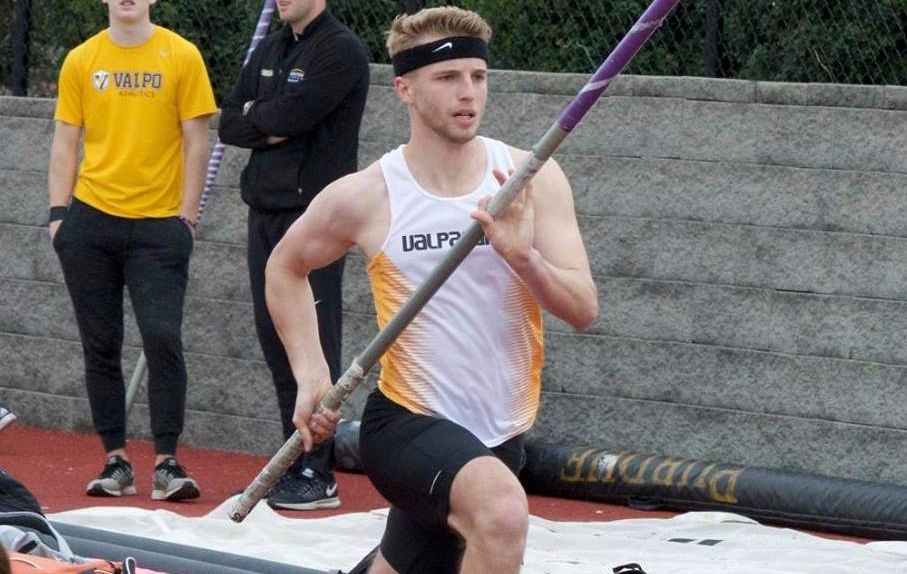 Alex Watson won the pole vault at 4.65 meters on Saturday.

The Valparaiso University men’s and women’s track and field teams competed in an outdoor meet with their full squads for the first time this spring on Saturday at the Edmonds Invite hosted by St. Joseph’s College in Rensselaer, Ind.

The women’s throwers provided the highlights of the day, as Nellie Bonham (Palos Hill, Ill. / Stagg) and Abby Jankowski (Milwaukee, Wis. / Greendale) put together strong performances. Bonham won the hammer with a throw of 43.07 meters, while Jankowski turned in a throw of 40.75 to place third in the event. Both Bonham and Jankowski’s hammer heaves represented personal records.

“The performances by Nellie and Abby were the big stories of the day for me,” Valpo head coach Ryan Moore said. “Abby came back in the last throw in the finals of the women’s discus in the rain. It was nice to see those results, especially since we had UIC and Milwaukee there as well. Getting some head-to-head competition in conference and coming away with wins is always nice.”

“Bruno ran really, really well for us,” Moore said. “We’re really excited to see what’s next for him. He’s getting ready to do some big things for us in the very near future.”

Junior Montel Hall (Waukegan, Ill. / Waukegan) had a good day in the long jump, leading the team at 6.52, fourth overall. Malik Riley (Romeoville, Ill. / Romeoville) came in seventh with a jump of 6.29. Riley also participated on the 4x100 relay team that placed third at 44.77. He was joined on the relay by Aaron Clark, Zach Topper (Portage, Ind. / Portage) and Evan Snow (Jacksonville Township, Ohio / Jackson).

“Weather was not a huge factor for us,” Moore said. “It didn’t start raining until 5 p.m. there, so we lucked out. In Valpo, it was raining all day. This was a good first full squad meet for us. It gave us a good opportunity to go against conference teams and we produced some good results.”

The Crusaders will return to action Friday as they head to Charleston, Ill. for the first of two days at the EIU Big Blue Classic.