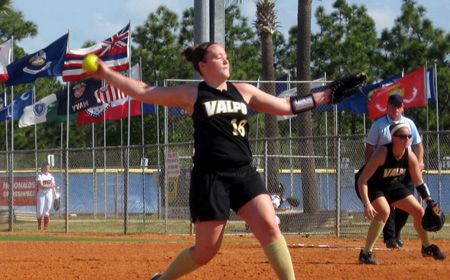 Freshman pitcher Alex Lagesse (Beecher, Ill./Beecher) has been tabbed the Horizon League Pitcher of the Week after going 2-0 with a 1.65 ERA in three starts last week, including tossing a no-hitter against Bryant.

Lagesse completely shut down the Bulldogs, giving up just two walks and not allowing a runner past first base in the Crusaders’ first no-hitter since April 16, 2007.  She followed with a complete-game five-hitter in a 4-1 win over Buffalo, and closed with five innings of work in a no-decision in Valpo’s victory over Penn.

On the year, Lagesse leads the Crusaders with a 1.27 ERA and is a perfect 3-0 in the circle.  She also has been stellar at the plate for Valpo, hitting .389 in 18 at-bats with three runs scored.  Lagesse and the rest of the Crusaders return to the field today for a twinbill at Ball State beginning at 1 p.m. CDT.