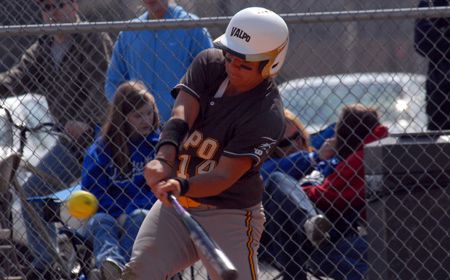 Valparaiso pushed the game-winning run across the plate in the top of the seventh in the nightcap Monday in Indianapolis, Ind. to earn an 8-7 victory over IUPUI and salvage a doubleheader split.  The Jaguars defeated the Crusaders in the opener, 10-1.

Valpo got the scoring going in the day’s second game right away, as Ashley Wolter (Denver, Iowa/Denver) stepped up with two outs in the top of the first and smashed a two-run homer, her fourth of the season, to give the Crusaders a 2-0 lead.  The Jaguars cut the lead in half in the bottom of the second when a pair of Valpo errors combined to score Chelsie Hale.

The Crusaders responded in a big way, putting a five spot on the scoreboard in the top of the third.  The first six batters of the inning all reached base safely, with Wolter, Joylyn Ichiyama (Torrance, Calif./Redondo Union), Alex Lagesse (Beecher, Ill./Beecher) and Whitney Warner (Greenwood, Ind./Center Grove) all tallying RBI singles.  With the score 6-1, Amy Raker came in out of the bullpen with none out for IUPUI and registered two quick outs, but Jill Jacobson (Beecher, Ill./Beecher) delivered an RBI double to push the advantage to 7-1.

IUPUI answered right back with four runs of their own, as with the bases loaded, Hale lined a hit into left field that took a bad hop all the way to the fence for a 3-run triple, while Hale would come around to score as well on an error to cut the lead to 7-5.  The Jaguars plated a run on a wild pitch in the fifth and an RBI single in the sixth to knot the score at seven.

With the score tied, Ichiyama got the Crusader rally started in the top of the seventh with a double to left-center field.  Lagesse followed with a walk, after which Kelsey Phalen (Batavia, Ill./Batavia) pinch-ran for Ichiyama.  Two batters later, the Jaguars looked to have an inning-ending double play turned, but the second baseman’s relay sailed wide of first base, allowing Phalen to cross the plate with the go-ahead run.  Stephanie Kelly (Plainfield, Ill./Plainfield) set down the Jaguars 1-2-3 in the bottom half of the frame, retiring the final two batters via strikeout, to close out the game.

Kelly earned the complete-game victory for Valpo, allowing just three earned runs while striking out nine Jaguar hitters, improving to 5-3 on the season.  Amy Raker took the loss for IUPUI in five innings of relief, giving up just the lone unearned run.  Ichiyama led the Crusader offense with three hits as they rapped out 13 hits on the ballgame.

In the opener, the Jaguars pushed two runs across the plate in the bottom of the first to take the early advantage.  Valpo struck back with a single tally in the second, as Phalen and Ichiyama led off the inning with back-to-back walks.  Lisa DeBruzzi (Carlisle, Mass./Concord-Carlisle) stepped in and delivered an RBI single through the left side to plate Phalen.  But IUPUI scored six in the third inning, including a grand slam by Laura Wilcox, and went on to the run-rule victory.

Valparaiso (16-7) returns to action Wednesday as the Crusaders head to DeKalb, Ill. to take on Northern Illinois.  First pitch of the twinbill is slated for 3 p.m., and all the action can be heard live on WVUR, 95.1 FM, Valparaiso and online at www.valpoathletics.com, which will also have a link for live stats.