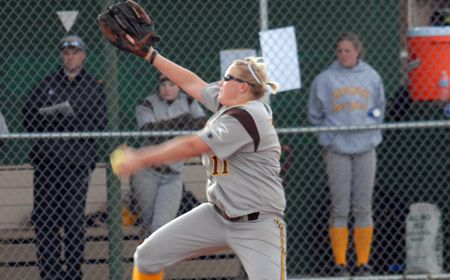 Stephanie Kelly has complete-game wins in each of her last three starts in the circle. (Ray Acevedo)
Related Links

Setting the Scene: Valparaiso continues play this week with five games over three dates.  The Crusaders travel to Dekalb, Ill. to face Northern Illinois in a twinbill on Wednesday before returning home for a three-game series against Horizon League foe UIC this weekend.

Series Histories: The Crusaders are above .500 under Randy Schneider against both of this week’s opponents.
Northern Illinois - Valpo is just 6-23 all-time against the Huskies, but is 5-4 against NIU under Schneider, including a doubleheader sweep at the VU Softball Field on March 25, 2008.  Courtney LaFerle went 4-for-5 with four RBIs over the two games to lead the Crusaders offensively, while Stephanie Kelly and Carrie Franson earned the wins in the circle.  Andrea Zappia also registered saves in both games.
UIC - The Crusaders’ Chicago rivals own a 48-7 advantage in the all-time series, but Valpo has captured three of the last five meetings, including a sweep last year in a Horizon League twinbill at Flames Field on April 11.  Valpo’s offense exploded for 22 runs and 25 hits over the two games, led by five hits from Shannon Robinson.  Whitney Warner drove in eight runs over the twinbill as well.

Previously in Valpo Softball: The Crusaders swept their Horizon League opening three-game set last weekend against Detroit, rallying from four runs down for a 5-4 victory in the opener before pitching back-to-back shutouts to complete the sweep.  Most recently, Valpo traveled downstate on Monday and split a twinbill with IUPUI, losing 10-1 before rebounding for an 8-7 win in the nightcap.

Following the Crusaders: The Northern Illinois doubleheader on Wednesday will be broadcast live via SportsJuice, while the UIC series will not be broadcast.  The campus student radio station is scheduled to broadcast 21 Crusader softball games this year.  Most games will be aired live over the airwaves (95.1 FM, Valparaiso) and online at www.valpoathletics.com, while selected contests will be broadcast at www.sportsjuice.com.  Live stats for all five games will also be available through the official athletics website.

Sweep to Start: Valparaiso’s sweep over Detroit was the first time the Crusaders swept a Horizon League foe over a three-game league series.  The last time that Valpo took every game in a conference series (three games or longer) was March 23-24, 2007 when the Crusaders downed UMKC in three straight contests.  Valpo did on two occasions last year sweep two games from a Horizon League opponent (UIC, Butler).

Keep On Crossing the Plate: This year’s incarnation of the Crusaders has been Schneider’s most proficient at scoring runs to date.  The 2007 squad, which was the highest-scoring team in Schneider’s tenure, averaged 4.39 runs/game, but this year’s team is averaging 5.61 runs/game.  If the pace keeps up, the 2009 team will easily break the current single-season runs scored record of 211, held by the 1987 team.

On a Record Pace: The single-season runs scored record is just one of the team offensive marks that is in danger of being broken by this year’s team.  The 2009 squad is currently batting .333, over 50 points better than any Crusader team has hit over the course of a full season, and is also more than halfway to records for hits, RBIs and total bases prior to the halfway point of the season.

Thievery Abounds: The Crusaders earned an NCAA statistical plaque in 2008, leading all of Division I softball with an average of 2.57 stolen bases/game, and this year’s squad has been even more aggressive on the basepaths.  Valpo has already stolen 91 bases in just 23 games, an average of 3.96 per contest, while running at a 85.8% success rate.  The 91 steals is second-most in a single season, just 35 shy of last year’s team record, while four Crusaders already have reached double figures, including two in Valpo’s single-season top-five for individuals already.

Youth Movement: This year’s Crusader squad consists of 14 underclassmen and just six upperclassmen.  Six or more underclassmen have started 20 times for Valpo, with a high of eight freshmen/sophomores seeing the starting ten against Bryant and the opener at IUPUI.

Korb Runs Away: Senior Karen Korb has already raked in a pair of Horizon League accolades this year, being named the league’s Player of the Week and also Female Scholar-Athlete of the Week for the week ending March 8.  Also one of 30 candidates nationwide for the Lowe’s Senior CLASS Award, Korb has led off every game in center field for Valpo this year and already has 21 steals, second-most in a single season in Valpo history behind only her own junior campaign.  She  has extended her career record to 86 thefts and is also fourth in program history with 79 runs scored.

Strickland Swings the Hot Bat: Freshman Sara Strickland has been Valpo’s hottest player at the plate over its last ten games, batting .484 with seven doubles and 12 runs scored.  She has also drawn six walks over that span and stolen ten bases.  Strickland currently leads the Crusaders with 22 runs scored and has now successfully swiped 19 bags in as many attempts this year, already good for fifth-most in a single year in Valpo history.

Wolter Goes Yard: Senior Ashley Wolter has hit four home runs over Valpo’s last ten games, a stretch over which she is hitting .448 with team bests of 12 RBIs and .897 slugging.  The four long balls give the senior 17 for her career, second-most in Valpo history, while her team-leading 19 RBIs on the campaign have increased her career output to 71 driven in, good for fourth all-time in program history.

Rutkowski Does It All: Freshman Jordan Rutkowski has showcased herself as a complete player for the Crusaders in the first half of the 2009 campaign.  Rutkowski has been a blend of power (.365, 16 RBIs) and speed (12 stolen bases) on offense while hitting in the middle of the Valpo order.  She also has stood out with the glove, committing just one error while playing every inning in the field in each of the Crusaders’ first 23 games.

Kelly Starts and Finishes: Senior Stephanie Kelly has been dominant over her last three starts, allowing just four earned runs in three complete-game victories, highlighted by a two-hit shutout Saturday against Detroit.  Kelly leads the Crusaders in ERA (1.44) and strikeouts (47) on the season and owns a 5-3 record.  The senior moved into fourth place on Valpo’s all-time strikeout chart after K’ing nine batters Monday at IUPUI, giving her 262 career strikeouts.

Lagesse Mows Them Down: Freshman Alex Lagesse threw Valpo’s first no-hitter since April 16, 2007 when she dominated the Bryant lineup on March 9.  In a 12-0 five inning victory, Lagesse gave up just two walks and did not allow a Bulldog runner past first base.  Lagesse earned Horizon League Pitcher of the Week honors for her performance that week.  She also tossed a one-hitter Sunday to conclude Valpo’s sweep over Detroit, and currently is 4-1 with a 1.59 ERA on the year.

Conner Tears Up Titans: Sophomore Sadie Conner enjoyed a standout series over the weekend in Valpo’s three-game sweep of Detroit.  Her weekend was highlighted by a three-run homer in the bottom of the seventh of the opener against the Titans, completely erasing Valpo’s deficit as it went on to a 5-4 win.  Over the weekend, Conner went 5-for-7 with four runs scored and four RBIs, with a .750 on-base percentage and 1.143 slugging percentage.

Jacobson Sets New Crusader Mark: Sophomore Jill Jacobson has had a team-high 11 opportunities to score a runner from third with less than two out this year, and has succeeded seven times, including a new Valpo single-season record with five sacrifice flies.  The sac flies have contributed to Jacobson’s total of 14 RBIs through Valpo’s first 23 games, good for third-best among the Crusaders.