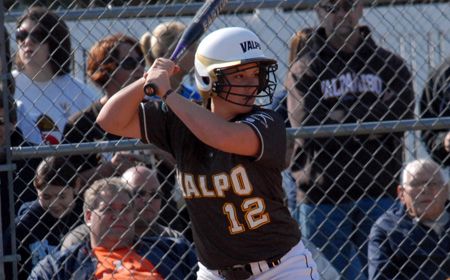 Setting the Scene: A crucial week is in store for Valparaiso, as the Crusaders will play one-third of their remaining Horizon League contests over the next six days.  Valpo will host Wright State on Wednesday and Thursday before heading to the Windy City to take on Loyola Saturday and Sunday.

Series Histories: Valpo owns a 9-3 record all-time against Wright State, but Loyola holds a 27-16 edge in the all-time series over the Crusaders.
Wright State - In their first meeting with the Raiders under Randy Schneider, the Crusaders split a twinbill last year in Dayton on April 24, winning the opener 3-2 in nine innings before dropping a 4-2 decision in the nightcap.  Andrea Zappia pitched ten innings over the two games, earning both decisions.  Tracy Korth and Whitney Warner each registered four hits over the duration of the twinbill.
Loyola - Valpo earned its first victories over the Ramblers since 2000 last year, taking two of three in a series at home on April 5-6, winning the first two 7-3 and 2-1 before dropping a 1-0 pitcher’s duel in the finale.  Zappia earned a win, a save and a loss in the three contests, throwing a total of 15 innings.  The Crusaders broke the team single-season stolen base record in the second game of the series, while Karen Korb set a new individual single-season mark in the same game.

Previously in Valpo Softball: Valpo split non-league doubleheaders at IUPUI on Monday and at Northern Illinois on Wednesday.  The Crusaders were scheduled to play a three-game set at the Valparaiso University Softball Field against UIC over the weekend, but all three contests were wiped out due to inclement weather/field conditions and will not be made up.

Following the Crusaders: All three games of the Wright State series will be broadcast by WVUR.  The campus student radio station is scheduled to broadcast 21 Crusader softball games this year.  Most games will be aired live over the airwaves (95.1 FM, Valparaiso) and online at www.valpoathletics.com, while selected contests will be broadcast at www.sportsjuice.com.  Live stats for all six games this week will also be available through the official athletics website.

Rebounding After Defeats: The 2009 Crusader squad has proven adept thus far at avoiding losing streaks.  Valpo has lost eight games this year, and all eight times has followed in its next game with a victory.  The Crusaders have scored better than seven runs per game in games following losses, and five times have held their opponent to zero or one runs.  They have won some tight games (a pair of one-run decisions), as well as some in blowout fashion (three wins by at least five runs).

Keep On Crossing the Plate: This year’s incarnation of the Crusaders has been Schneider’s most proficient at scoring runs to date.  The 2007 squad, which was the highest-scoring team in Schneider’s tenure, averaged 4.39 runs/game, but this year’s team is averaging 5.80 runs/game.  If the pace keeps up, the 2009 team will easily break the current single-season runs scored record of 211, held by the 1987 team.

On a Record Pace: The single-season runs scored record is just one of the team offensive marks that is in danger of being broken by this year’s team.  The 2009 squad is currently batting .333, over 50 points better than any Crusader team has hit over the course of a full season, and is also easily more than halfway to records for hits, RBIs, total bases, doubles and home runs prior to the halfway point of the season.

Thievery Abounds: The Crusaders earned an NCAA statistical plaque in 2008, leading all of Division I softball with an average of 2.57 stolen bases/game, and this year’s squad has been even more aggressive on the basepaths.  The Crusaders are averaging a nation-best 3.95 steals/contest and have been successful 86.6% of the time, including 25 of their last 26.  Their 97 total steals are already second-most in a single campaign in program history, while Karen Korb and Sara Strickland both already rank in the individual single-season top-five in the category.

Youth Movement: This year’s Crusader squad consists of 14 underclassmen and just six upperclassmen.  Six or more underclassmen have started 20 times for Valpo, with a high of eight freshmen/sophomores seeing the starting ten against Bryant, the opener at IUPUI and the nightcap at NIU.

Wolter Ties Crusader Record: Senior Ashley Wolter hit three home runs in Valpo’s four games last week, including a pair in the nightcap at Northern Illinois, giving her six on the season and 19 for her career, tying Gina Rhoda for the most in Crusader history.  Wolter’s six round-trippers this year are tied for the third-most in a single year all-time at Valpo.  She is currently leading the Crusaders with a .413 batting average and 23 RBIs, and has also moved onto Valpo’s all-time charts in batting average, RBIs and total bases.

Strickland Swings the Hot Bat: Freshman Sara Strickland has been Valpo’s hottest player at the plate over its last ten games, batting .484 with 12 runs scored, seven RBIs and seven stolen bases.  She is also slugging .742 over that span, thanks to five doubles and her first career home run.  Strickland currently is hitting .412 on the season with a team-best 25 runs scored and has now successfully swiped 20 bags in as many attempts this year, already tied for fourth-most in a single year in Valpo history.

Freshmen Producing in the Box: While Strickland has been the most productive freshman at the plate, the Crusaders also have three other freshmen regulars hitting better than .300.  Third baseman Jordan Rutkowski is hitting .358 with 17 RBIs, second-most on the team, while committing just one error at the hot corner.  Fellow infielders Joylyn Ichiyama and Kelsey Phalen also are above the .300 mark, and both have reached double figures in runs scored and RBIs.

Jacobson Leads the Nation: Sophomore Jill Jacobson has had a team-high 13 opportunities to score a runner from third with less than two out this year, and has succeeded eight times, including a new Valpo single-season record with five sacrifice flies, the highest total by any player in Division I softball.  The sac flies have contributed to Jacobson’s total of 15 RBIs through Valpo’s first 23 games, good for third-best among the Crusaders.

Korb Runs Away: Senior Karen Korb has already raked in a pair of Horizon League accolades this year, being named the league’s Player of the Week and also Female Scholar-Athlete of the Week for the week ending March 8.  Korb has led off every game in center field for Valpo this year and is hitting .366 with 24 steals, second-most in a single season in Valpo history behind only her own junior campaign.  She has extended her career record to 89 thefts and is also fifth in program history with 81 runs scored.

Kelly Starts and Finishes: Senior Stephanie Kelly has been dominant over her last three starts, allowing just four earned runs in three complete-game victories, highlighted by a two-hit shutout March 21 against Detroit.  Kelly leads the Crusaders in ERA (1.44) and strikeouts (47) on the season and owns a 5-3 record.  The senior moved into fourth place on Valpo’s all-time strikeout chart after K’ing nine batters last Monday at IUPUI, giving her 262 career strikeouts.

Lagesse Mows Them Down: Freshman Alex Lagesse threw Valpo’s first no-hitter since April 16, 2007 when she dominated the Bryant lineup on March 9.  In a 12-0 five inning victory, Lagesse gave up just two walks and did not allow a Bulldog runner past first base.  Lagesse earned Horizon League Pitcher of the Week honors for her performance that week.  She also tossed a one-hitter last Sunday to conclude Valpo’s sweep over Detroit, and currently is 4-2 with a 1.99 ERA on the year.

McGee Stays Perfect: Freshman Sam McGee put together another solid outing in the circle in the nightcap at Northern Illinois last Wednesday, throwing a complete-game six-hitter as Valpo cruised to the 13-1 victory.  The win improved McGee on the season to 7-0 with a 2.22 ERA.  Her seven wins are the most by a Crusader freshman pitcher since 1997, when Erin Smith concluded the season with nine victories on the rubber.