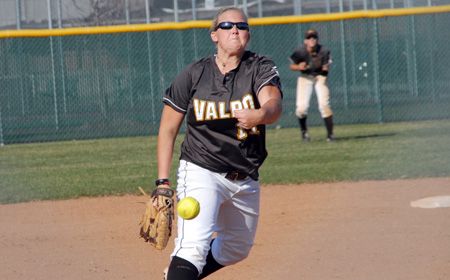 Setting the Scene: Valparaiso looks to bounce back this week as the Crusaders play five games in a three-day span.  Valpo starts its trek east with a non-league doubleheader at Notre Dame on Thursday before playing a key Horizon League series at Youngstown State on Friday and Saturday.

Series Histories: The Crusaders own a 10-5 advantage in the all-time series over the Penguins of YSU, but Notre Dame holds the 27-11 edge in the series against Valpo, a series in which the Crusaders have not been victorious since 1989.
Youngstown State - In their first meeting with the Penguins under Randy Schneider, Valpo took two of three from YSU on April 26-27, 2008 at the VU Softball Field.  The Crusaders earned victories in the first (4-1) and third (13-5) games of the series, while the Penguins took the middle contest, 7-2.  Andrea Zappia earned both victories in the circle for Valpo, while Courtney LaFerle led the way at the plate, going 5-for-7 with three RBIs.
Notre Dame - Zappia threw up matching zeros with Irish hurler Brittney Bargar through four innings in the teams’ last meeting at the VU Softball Field on April 29, 2008, but Notre Dame broke through with a run in the fifth and went on to a 6-0 victory.  Karen Korb went 1-for-3 with her team-record 29th stolen base of the season to lead the Crusaders.

Previously in Valpo Softball: Valpo struggled through a week of Horizon League action last week, dropping all three games in a mid-week home series to Wright State before losing two out of three in the weekend series at Loyola.  The losses drop the Crusaders to 4-5 in league play, placing Valpo fifth in the Horizon League standings entering this week’s action.

Following the Crusaders: Live stats for all five of this week’s contests will be available through the official Crusader website at www.valpoathletics.com.

Eight is Not Enough, And Neither is Nine: Prior to this past week, the last time the Crusaders had played a game that went at least ten innings was on April 8, 2006, when Valpo played a doubleheader at IUPUI that went a combined 21 innings (10, 11).  But the Crusaders played two such games in a four-day span last week.  Valpo’s series opener with Wright State on Wednesday went into the tenth inning before the Crusaders suffered a 9-7 loss.

The Longest Game Ever: But that game paled in comparison to the Crusaders’ opener with Loyola on Saturday, as the two sides played more than two full games before Valpo finally pushed across the game-winning run in the 15th inning for a 4-3 victory.  The game was the longest in both Valpo and Loyola softball history, and is tied for the 18th-longest contest in NCAA Division I softball history.  Also, the Crusaders left 20 runners on base over the 15 innings, the most in a single game in school history and tied for seventh-most all-time in Division I.

Keep On Crossing the Plate: This year’s incarnation of the Crusaders has been Schneider’s most proficient at scoring runs to date.  The 2007 squad, which was the highest-scoring team in Schneider’s tenure, averaged 4.39 runs/game, but this year’s team is averaging 5.19 runs/game.  If the pace keeps up, the 2009 team will easily break the current single-season runs scored record of 211, held by the 1987 team.

Thievery Abounds: The Crusaders earned an NCAA statistical plaque in 2008, leading all of Division I softball with an average of 2.57 stolen bases/game, and this year’s squad has been even more aggressive on the basepaths.  The Crusaders are averaging a nation-best 3.29 steals/contest and currently lead California by better than three-tenths of a steal per game.  Their 102 total steals are already second-most in a single campaign in program history, while Karen Korb and Sara Strickland both already rank in the individual single-season top-five in the category.  The duo also both sit among the top-20 nationally in stolen bases/game.

Wolter Sets the Record: Senior Ashley Wolter broke Valpo’s career home runs record on Saturday in the opener against Loyola when she launched a solo shot to lead off the top of the tenth inning.  The bomb was Wolter’s seventh of the season, third-most in a single season in Crusader history.  The senior currently ranks third in the league with seven round-trippers and is second with 25 RBIs, while also ranking among the Horizon League’s best in batting average, slugging and on-base percentage, and total bases.

Strickland Swings the Hot Bat: Freshman Sara Strickland has been one of the Crusaders’ most consistent producers at the plate this season.  Strickland launched a two-out, two-run homer in the bottom of the seventh to send Valpo’s opener with Wright State to extra innings, her 11th extra-base hit of the year, tying her for the team lead in the category.  The freshman is currently third in the Horizon League with a .378 batting average and second with a .477 on-base percentage, while leading the league in runs scored (27) and ranking second in stolen bases (21).

Kelly Going the Distance and Then Some: Senior Stephanie Kelly was a workhorse in the circle for the Crusaders last week.  Kelly threw all ten innings in Valpo’s loss in the opener against Wright State, the first time a Crusader hurler had tossed that many innings in six years, but one-uped herself on Saturday.  The senior threw all 15 innings in the win over Loyola, setting a new Crusader individual record for innings pitched in a single game.  She allowed just one earned run while striking out a career-high 14 batters in the winning effort.  On the year, Kelly ranks second in the league with a 1.83 ERA and has struck out 69 batters, moving into fourth place on Valpo’s all-time chart in the category.

Korb Continues to Run: Senior Karen Korb has continued to be one of the nation’s preeminent threats on the basepaths.  Korb has swiped 25 bases in 26 attempts this year, leading the league and ranking ninth in the nation in stolen bases/game.  It is also the second-most steals in a single season in school history, behind only her own junior campaign, and has increased her career record to 90 steals.  She has also been stellar at the plate this year, hitting at a .345 clip, and is just nine hits shy of Valpo’s all-time top-five in the category.