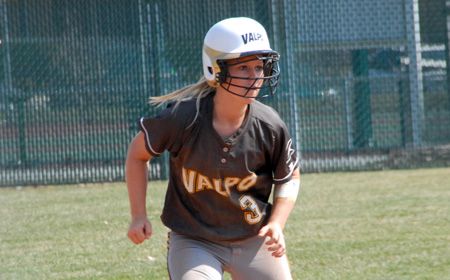 “I’m really proud of our players today,” said Crusader head coach Randy Schneider.  “They’ve been working really hard at maintaining focus over a full day, coming out and being more mentally tough, toughness you need not just when you’re behind, but also when you’re ahead to hold on to leads.  I thought we did a great job of exhibiting that toughness today, enabling us to win all three ballgames.  Whenever you can get a three-game sweep on the road, you feel like you can eat a little bit more.”

The Crusaders jumped out to an early 2-0 lead in the opener, as Strickland homered in the first and Whitney Warner (Greenwood, Ind./Center Grove) drove in Sadie Conner (Washington, Ill./Washington) with an RBI single in the second.  The game quickly turned into a high-scoring affair however, as the Penguins pushed across two runs in the bottom of the second to tie the game.

Valpo responded immediately in the third frame, as Strickland led off with a single and eventually came around to score on a wild pitch.  Later in the inning, Warner came up with a two-run single, plating Jordan Rutkowski (Alden, N.Y./Alden) and Joylyn Ichiyama (Torrance, Calif./Redondo Union), to increase the Crusader edge to 5-2.  But YSU took the lead for the first time in the bottom of the third, as a three-run home run by Jordan Ingalls and a solo shot two batters later by Kristen Philen chased Valpo starter Stephanie Kelly (Plainfield, Ill./Plainfield).

The Crusaders didn’t trail for long, retaking the lead in the top of the fourth on an RBI single by Ashley Wolter (Denver, Iowa/Denver) and a sacrifice fly by Rutkowski.  Valpo added another tally in the fifth when Jill Jacobson (Beecher, Ill./Beecher) drove in Conner, and put some distance in the lead in the sixth.  Conner drove in the first run of the inning with a sacrifice fly, and later in the frame with two runners on base, Jacobson sent a shot over the fence in right field for her first career home run to push the Valpo lead to 12-6.  The Crusaders would add another run in the seventh on an RBI groundout by Rutkowski as they scored in each of the seven innings.

Shaleigh Jansen (Ottawa, Ill./Ottawa Township) got the job done in the circle for Valpo, allowing just one hit and one run in her three innings of relief to improve to 2-3.  Cheryl Cale took the loss for Youngstown State, allowing 17 hits and 13 runs, all earned, in a complete-game effort, falling to 5-13.  Warner led the Crusaders at the plate in the opener, going 4-for-4 with three RBIs, while Strickland and Wolter each registered three hits.  Strickland also scored four times, while Jacobson drove in a team-best four runs.

The middle game of the tri-bill was a complete 180 from the opener, as the two teams engaged in a pitchers duel.  The Crusaders’ Sam McGee (Bloomington, Minn./Jefferson) put up matching zeros with the Penguins’ Ingalls in the circle through the first three innings.  Valpo finally broke the ice in the fourth inning, as Kelsey Phalen (Batavia, Ill./Batavia) led off the frame with a single and came around to score on a YSU error.  The same scenario presented itself in the fifth, as Strickland started a two-out rally with a double, moved to third on a wild pitch and scored on an error to give Valpo a 2-0 edge.

The Penguins cut the lead in half in the bottom of the sixth, as with one out, Ingalls doubled to the right-center gap and scored two batters later on an RBI single by Autumn Grove.  But that was all the scoring Youngstown State would get off of McGee, and the Crusaders added an insurance tally in the seventh when Strickland registered a one-out triple and scored on a groundout by Phalen.

McGee earned the complete-game victory, improving to 8-2 on her rookie campaign as she scattered six hits.  Ingalls took the loss for the Penguins despite registering five strikeouts in her seven innings of work.  Rutkowski and Strickland each recorded two hits in the game at the plate for Valpo.

Ingalls started the nightcap in the circle for YSU as well, but the Crusaders greeted her rudely.  Karen Korb (Indianapolis, Ind./Lutheran) led off the game with a hard-hit single, followed by a Strickland walk.  A sacrifice bunt moved both runners into scoring position for Wolter, who drilled a two-run double into the right-center gap.  Following a Rutkowski single, Ingalls was taken out for reliever Erin Schindler.  Ichiyama welcomed her with a perfectly executed squeeze bunt to score Wolter to give Valpo a 3-0 lead.

That was all the scoring Valpo would need, as Kelly rebounded from a rough outing in the opener with a three-hit shutout to improve to 7-5.  The Crusaders added a pair of runs in the second on a two-run single by Katie Williams (Chicago, Ill./Lane Tech [Kishwaukee C.C.]), while Conner connected on a two-out solo home run in the third.  They concluded the scoring in the fourth on an RBI single by Strickland and an RBI groundout from Williams, giving the Crusaders an eight-run lead to end the game after five innings via run rule.

Ingalls took the loss in the circle for Youngstown State (6-27, 3-11 Horizon), her second decision of the game to fall to 1-12 in 2009.  Eight different Crusaders combined for the eight hits in the game, while Korb scored three runs and Williams registered a career-best three RBIs.

Over the three games, Strickland led the way, going 6-for-10 with her eight runs scored to surpass Gina Rhoda’s single-season record of 33 runs scored, a record which had stood since 1986.  Warner went 5-for-8 with three RBIs, while Conner and Korb each scored three runs apiece over the tripleheader.  Valparaiso also set a single-season program record for RBIs, surpassing the previous record, set by last year’s squad, on Strickland’s RBI single in the fourth inning of the finale.

“I was really proud of Sara today, she just had an All-American caliber day for us at the plate,” said Schneider.  “Lisa DeBruzzi (Carlisle, Mass./Concord-Carlisle) and Whitney both did a good job behind the plate for us, as well as hitting the ball.  It was also great to see Jill get her first career home run today.”

Valparaiso (21-15, 7-5 Horizon) returns to the Valparaiso University Softball Field on Thursday with a non-league twinbill against Big Ten rival Purdue, a series that the Crusaders lead 4-3-1 since Schneider’s arrival.  First pitch of the opener is set for 2 p.m., and all the action can be heard live on WVUR, 95.1 FM, Valparaiso and online at www.valpoathletics.com.  The official Crusader website will also have links for live stats.