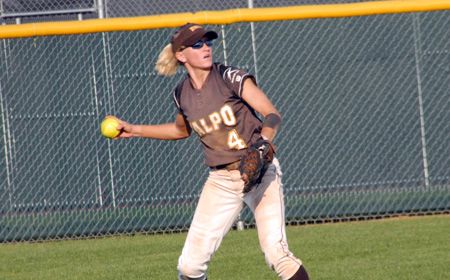 Valparaiso senior Karen Korb (Indianapolis, Ind./Lutheran) has been named the U.S. Army Horizon League Female Scholar-Athlete of the Month for the month of March, the league office announced today.

Korb hit .360 for the Crusaders during March, mostly out of the leadoff spot, helping to lead Valpo to a 17-7 record.  She earned league Athlete of the Week accolades for the week ending March 8, and concluded the month with 24 stolen bases to go with 20 runs scored.  She also increased her ongoing program stolen bases in a career record to 89 and moved into Valpo’s all-time top-five in runs scored.

In the classroom, Korb carries a 3.94 GPA as a double major in finance and marketing.  A two-time CoSIDA Academic All-District V honoree, Korb has twice been recognized as the league’s Scholar-Athlete of the Week, including this season for the week ending March 8, and was named one of 30 candidates nationwide for the Lowe’s Senior CLASS Award.  She has been a member of the Horizon League Academic Honor Roll all three semesters Valpo has been in the league, and has been named to the Dean’s List and earned Valpo Presidential academic honors every semester during her tenure as a Crusader.