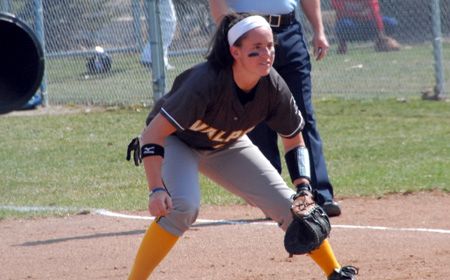 Setting the Scene: Coming off of a tripleheader sweep on Saturday, Valparaiso will play five games this week.  The Crusaders will host Purdue in a doubleheader at home on Thursday before traveling to Green Bay this weekend for a key three-game league series with the Phoenix.

Series Histories: Valparaiso is just 7-20-1 all-time against Purdue, but owns a 4-3-1 record over the Boilermakers since head coach Randy Schneider’s arrival.  Green Bay has a 14-2 edge in the all-time series against the Crusaders.
Purdue - The two squads split a doubleheader on April 15 last year in West Lafayette, as the Boilermakers won the opener, 3-0, before the Crusaders captured a 4-1 victory in eight innings in the nightcap.  Shannon Robinson registered three hits and two runs scored on the day, while Andrea Zappia earned the win in the second game, tossing 7.2 innings of four-hit ball.
Green Bay - The only Horizon League team Valpo did not face in the regular season last year, the Phoenix scored eight unanswered runs in the Horizon League Tournament for an 8-1 victory over the Crusaders, ending Valpo’s 2008 campaign.  Ashley Wolter hit a solo homer in the bottom of the first for the Crusaders’ only run of the contest.

Previously in Valpo Softball: The Crusaders opened last week at Notre Dame on Thursday, dropping a pair of games to the Irish by scores of 11-0 and 17-9.  Valpo then traveled to Youngstown State, where it was supposed to face the Penguins in a single game on Friday.  That game got postponed, however, creating a rare tripleheader on Saturday, and the Crusaders took full advantage, sweeping YSU by scores of 13-8, 3-1 and 8-0 to move two games over .500 in league play.

Offense Awakens: Valparaiso was held to just one hit in its opener at Notre Dame, but erupted in the nightcap against the Irish, scoring nine runs, the most any Crusader team has hung on ND since 1985.  The offensive production carried over into the weekend, as Valpo scored 24 runs in its three wins at Youngstown State.  Over the last four games, the Crusaders hit .375, drew 13 walks, and slugged at a .615 clips.  Five different players hit home runs over the four-game stretch, while 11 different Crusaders drove in runs.

Tripleheader? No Problem at All: Inclement weather last Friday forced the Crusaders to play a tripleheader on Saturday against the Penguins, but Valpo came through with wins in all three games.  The Crusaders last played three games in one day on March 3, 2008 at the Rebel Spring Games, going 1-2 that day.  The last time prior to Saturday that Valpo had played a true tripleheader, with three consecutive games against the same opponent, was April 17, 1999, when the Crusaders hosted a Mid-Con tri-bill versus IUPUI.

Keep On Crossing the Plate: This year’s incarnation of the Crusaders has been Schneider’s most proficient at scoring runs to date.  The 2007 squad, which was the highest-scoring team in Schneider’s tenure, averaged 4.39 runs/game, but this year’s team is averaging 5.39 runs/game.  The 2009 squad has already scored 194 runs this year, fourth in a single-season in Crusader history and just 17 runs behind the 1987 team’s mark of 211 runs.

Thievery Abounds: The Crusaders earned an NCAA statistical plaque in 2008, leading all of Division I softball with an average of 2.57 stolen bases/game, and this year’s squad has been even more aggressive on the basepaths.  The Crusaders are averaging a nation-best 3.06 steals/contest and currently lead Alabama, last year’s runner-up, by 0.18 steals/game.  Their 110 total steals are already second-most in a single campaign in program history, while Karen Korb and Sara Strickland both already rank in the individual single-season top-five in the category.  The duo also both sit among the top-25 nationally in stolen bases/game.

Strickland Blazing at the Plate: Freshman Sara Strickland set Valpo’s single-season runs scored record last weekend, crossing the plate eight times Saturday at YSU, giving her a Horizon League-best 37 runs scored on the season, surpassing Gina Rhoda’s previous mark of 33 set in 1986.  The freshman went 9-for-16 with ten runs scored, four RBIs and five extra base hits last week for the Crusaders.  On the season, Strickland is second in the league with a .406 batting average, leads the league in on-base percentage, and is also among the top-five in slugging percentage, hits, doubles, total bases, walks, and steals.

Pitching Staff Performs Against Penguins: The Crusaders got contributions from their entire pitching staff in the sweep of Youngstown State on Saturday.  Freshman Shaleigh Jansen came into the opener in relief and threw 3.2 innings of one-hit ball to earn the victory.  Freshman Sam McGee followed with a complete-game seven-hitter, giving up just one run, in the middle victory, while senior Stephanie Kelly rebounded from a rough start in the opener to toss a three-hit shutout in the nightcap.  Kelly currently ranks third in the Horizon League with a 2.29 ERA on the season, while McGee leads Valpo with eight victories.

Korb Continues to Run: Senior Karen Korb has continued to be one of the nation’s preeminent threats on the basepaths.  Korb has swiped 28 bases in 30 attempts this year, leading the league and ranking eighth in the nation in stolen bases/game.  It is also the second-most steals in a single season in school history, behind only her own junior campaign, and has increased her career record to 93 steals.  She has also parlayed many of her times on base into runs, as she has crossed the plate 30 times this year, seventh-most in a single season all-time at Valpo.  Korb has now scored 90 times on her career, third-most in Crusader history and just three tallies shy of the top spot.

Quickly: Korb hit her first career home run in the nightcap at Notre Dame ... Carrie Franson made her season debut in the nightcap against the Irish ... Jill Jacobson connected on her first career round-tripper in the first game at Youngstown State ... Whitney Warner went 4-for-4 in the opener at YSU, her first career four-hit game ... Sadie Conner had three hits, all for extra bases, in the two games she played at YSU ... Strickland has now scored multiple runs in four straight games.